The official start of Summer is still over a month away, but the weather is already feeling and looking a lot more like Summer than Spring!  Temperatures have already hit the 90s, and we’ve already seen some blustery, summertime storms showing up in this heat.

Now is a good time to remind you that summertime storms can bring some of the worst weather you’ll deal with all year.

LIVE ALERT 19 and WHNT.com: Track showers and storms with WHNT.com's Interactive Radar or swipe over to the radar feature on Live Alert 19!

Worst all year you say?

Yep!  Some of the nastiest storms of the year happen in the summer season, but they are not always 'severe' like the powerful, destructive storms of Spring and Fall (the ones that bring the extreme winds and tornadoes).  Most of us never have to deal with a tornado; only 1% of Alabama's land area was impacted by a tornado on April 27, 2011 (the largest, deadliest tornado outbreak in a generation).

The Storm Prediction Center's severe weather climatology shows how the risk of severe storms (mainly from wind) actually increases from May through June and July over a big part of the Southeast:

Summertime storms work differently than that, and it can be very, very hard to 'see' what they're doing on radar because they aren't spinning or causing long-term strong winds that are more easily tracked in the Spring/Fall storms.  A storm does not have to be 'severe' to bring strong winds that can break branches on trees, heavy rain that can cause flash flooding, and dangerous (deadly) cloud-to-ground lightning.

So how do they work?

Summer storms are more simple than the severe storms of the other seasons: updrafts and downdrafts.  Hot, humid air rises (quickly) creating the storm, but eventually that air cools, condenses out water vapor, and gets too heavy for the updraft to hold.  That's when it crashes to the ground in what we call a 'downburst' (see one happen over Huntsville last summer here on WHNT.com).  Those downbursts can fall to the ground at up to 100 miles per hour, and when they hit the ground all of that energy spreads out on the ground as damaging winds.

This is what happened over a broad area in May 2017 from Cullman County to Madison County in a cluster of storms that knocked out power to over 20,000 people, blew down trees, and created measured wind gusts over 90 miles per hour.

Here's the deal.  It does not matter if the wind is swirling in a funnel with a Tornado Warning or if it's blowing along the ground in a straight line; wind gusts that high are dangerous.

Anytime there's a storm in the area, take it seriously: especially if there is a Severe Thunderstorm Warning!

You can get free lightning alerts, warnings, and notifications about storms in the general area with Live Alert 19!

That happened over Huntsville last August, and the result was some incredible flooding at the foot of Monte Sano from Oak Park south to Blossomwood along Fagan Creek: WHNT.com Flash Flooding from August 10, 2017.

Lightning doesn't mean a storm is severe, but it's deadly anyway

All thunderstorms have lightning, but sometimes the lightning gets extreme.  Summer storms can produce hundreds of lightning strikes over the span of a few minutes.  Positive strikes that come from the tops of those storms (sometimes as high as 50,000 feet) are the most powerful; they're the ones that cause the most damage, and they can also strike as many as 10 miles away from where rain is falling.  That's called a 'bolt from the blue,' and we could see evidence of that happening in storms just this week! 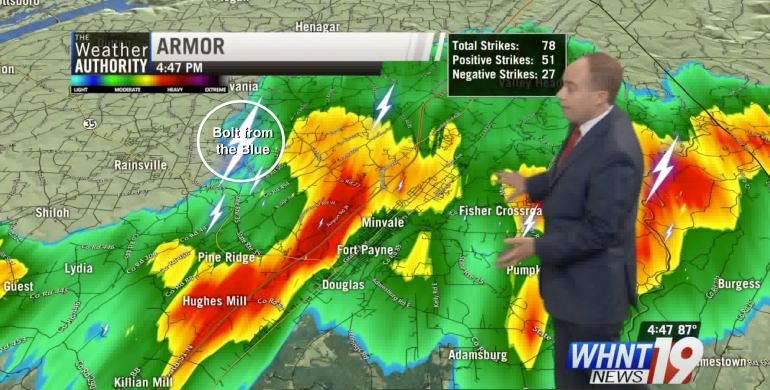 That's why it's critical to go inside anytime you hear thunder; you're close enough to be struck by lightning!

Looking for the forecast? It's always online at WHNT.com/Weather and in the “Daily Forecast” section on Live Alert 19!

November has been unusually warm and dry.

Huntsville International measured 0.48" through Wednesday afternoon for a grand total of 0.56" of rain so far this month. Through the 25th, that's eighth-driest on record since 1894 in Huntsville!

One or two heavy storms may still develop; however, it is unlikely that 'severe' storms develop with the passing cold front Wednesday evening.

The Storm Prediction Center maintains a risk of a few severe storms in the area on Wednesday evening; however, the threat is very, very low.