There’s an old saying I’ve heard over the years: ‘what happens in November, the winter will remember!”  It’s like most weather lore sayings having a grain of truth somewhere in there, but it doesn’t always work.

November so far in the Huntsville area has been cold.  In fact, November’s average temperature is only 45.8ºF: nearly ten degrees below the 30-year average.  That’s just outside the normal range (standard deviation) for Huntsville; in other words, it’s really, really unusual.

In spite of how October started, it actually ended up cooler than normal on 14 of the final 19 days of the month.

One thing we look for in a cold winter (think back to January 2014’s bitter cold and the five winter storms in January, February and March of 2015) would be this: 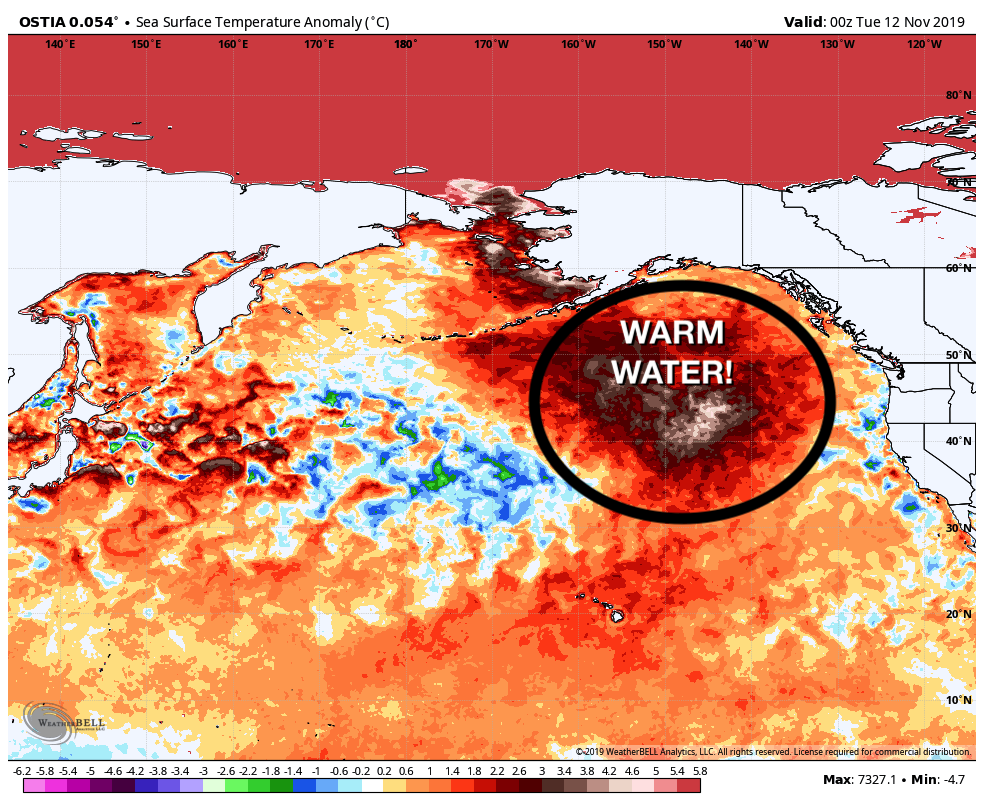 This sometimes gets called ‘the blob.’  It’s warmer than average water over the northeastern Pacific, and if it can persist through the winter season, it alters the jet stream: sending it north in a ‘ridge’ over the West and that translates to a southward bend – a trough – in the East.

We can’t tell this far out exactly what that means for a specific day or for a specific chance of snow or rain or storms or whatever you’re hoping for/against.

If you’re looking for a sign of cold winter weather, though, this is a big, bright one.  If the rest of the players come onto the field, this could be one to remember.  Especially if the winter remembers November!

A Chilly Inauguration Day In D.C.

As all eyes turn to Washington D.C. tomorrow for the Presidential Inauguration, the forecast looks quite chilly. Highs will stay in the 40s in D.C. tomorrow. A few light snow flurries are possible early in the day, but the sky may clear out some as the Inauguration begins.

It will be quite a windy day in Washington as well. Gusts over 30 mph are likely.

Dry Start To 2021 – Rain Chances Increasing In the Next Week

We haven't said this in a long time. "It's a dry start to the year." I literally recall  getting flooded out in 2019 and 2020 with so much rain in the Tennessee Valley. I still remember Alabama Highway 101 north of Town Creek flooding out because of so much winter rain. It happened two years in a row! So far, we haven't had anything close to that. Here is a…

Pattern Supports Some Storms In The Southern U.S. Early Next Week

We're still watching the pattern closely into early next week for the potential for some stormy weather. Models have not been particularly consistent with next week's system, but the overall pattern would suggest some stormier weather for the Southeastern U.S.

As mobile sports betting grows, so does the need for gambling addiction treatment

Pedestrian killed in crash on Hwy 72 in Colbert County

What the Trump children might do after the White House