As hot as August was, though, the average daily temperature ended up 0.1ºF below average: in spite of having the first 100-degree day in Huntsville since 2016!

There’s a chance we could come near 100ºF again in the next 10 days.  See the Forecast Discussion on WHNT.com for more on the building heat!

The dryness is showing, and the drought is slowly expanding and getting worse. Unfortunately, there’s no good news in respect to rain in the near future!

The NOMADS forecast model guidance shows only a 30% chance of more than 0.10” of rainfall on any given day through mid-September in Huntsville.

Now, September is usually a dry month, but even at that we average about 3.72” of rain in this 30-day period.

Surplus dwindling: Remember back in January, February, March, and April when most of us were begging for the rain to stop? Huntsville had a rainfall surplus of 11.88” on May First.

That year-to-date surplus had fallen to 6.71” on September 1st on four-straight months of drier-than-normal weather.

A yearly surplus is only a statistic. Rain is a ‘what have you done for me lately’ kind of need we have both agriculturally and hydrologically!

What’s the future hold? In the short-term, it dry. Dry as a bone. 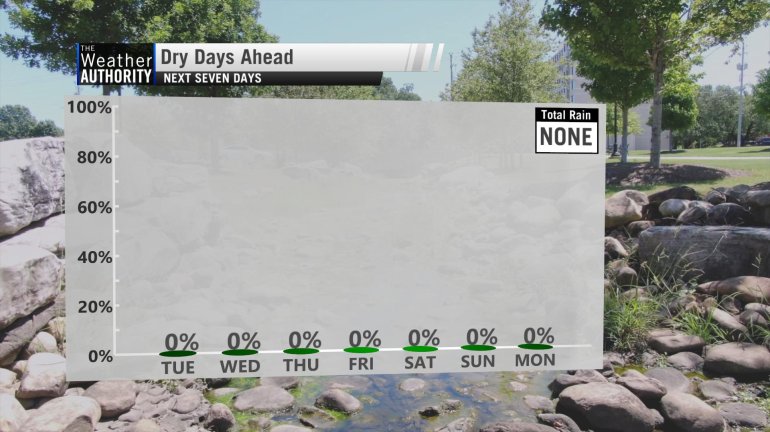 The outlooks from NOAA’s Climate Prediction Center look on target; the idea of below-average rainfall through the next 14 days seems almost like a guarantee unless something that is right now unforeseen (like a tropical system) makes an impact in Alabama and Tennessee.

Beyond fourteen days, the outlook through the end of the month is also a very dry one.

What are the odds that it doesn’t rain at all this month? Low. Very low.

Huntsville’s weather records date back to 1894, and although some of the data is spotty and incomplete, there are only two ‘complete’ September data sets recording zero rainfall for the month: 1897 and 1916, 1.6% of all Septembers on record.

Eighteen Septembers in that 124-year span had less than one inch of rain (14.5% of all Septembers on record).

The best we have to go on right now for long-term projections is model guidance, and it does show some rain this month. It just might not be a lot of rainfall unless something comes north from the Gulf of Mexico. That doesn’t look obvious at this time; however, the weather pattern projected beyond the 15th would make the Gulf a little more vulnerable to something brewing in the last half of the month.