The first full week of August marks the halfway point into our summer season, and the hottest week of the year for North Alabama on average! The average high temperature from August 1st through August 20th is 91°F – which is as hot as our ‘average’ high temperature gets in Huntsville. While we often rise above that mark at least a few times each year, the summer of 2019 has stayed pretty close to average.

Not only did we not experience a significant amount of extreme heat this season, but temperatures even spent much of late July below average: 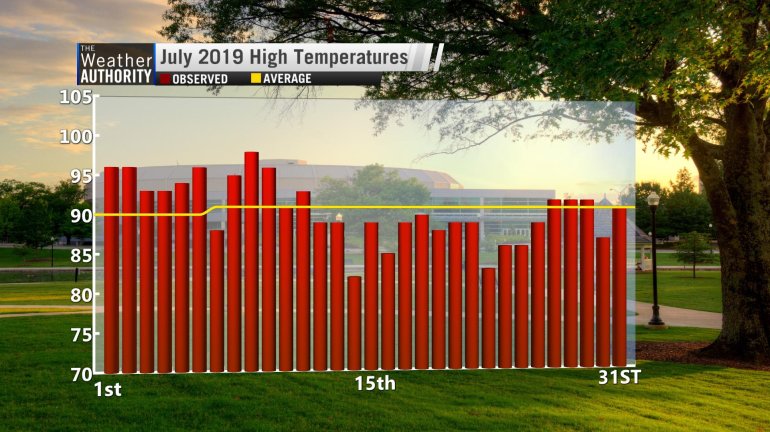 Could this be foreshadowing a similarly quiet end to the summer season? A few days of temperatures above average and a few days below average are likely to occur over the next two months, but we don’t see any immediate signs that the last half of summer will feature excessive heat.

The outlook from the Climate Prediction Center for the rest of August reflects the likelihood of ‘near normal’ weather, keeping the higher risk of above average temperatures to the south of the Tennessee Valley. 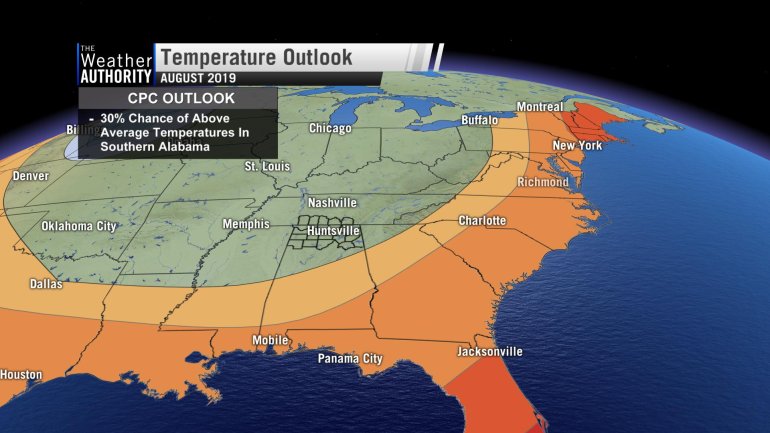 Just because we don’t expect to stray too far from average doesn’t mean change won’t come through the last half of summer though; since temperatures naturally start to cool off in September our ‘average’ high temperature will slip from 91°F down to 83°F by the fall equinox on September 23rd!

As for precipitation, we’re likely to see the same trend of sticking close to average moving forward. This comes as no surprise, since average rainfall amounts often correspond with average temperatures; more rain than average would contribute to cooler temperatures, while dry conditions tend to support warmer temperatures.

So far this summer season – since June 21st – Huntsville has received 5.07″ of rain, which is slightly below the average of 6.26″. Better storm chances later this week could help us catch up on rainfall though, and keep us near normal for another week.

For more on the local forecast check our discussion page here: WHNT.com/forecast

Multiple Rounds Of Rain Through Next Week

We will squeeze in dry time Friday into Saturday before the next round of rain heads our way late Sunday into Monday.

We could see some heavier rain Monday with the potential for thunderstorms. This is why our rain totals are in the 1"-3" range over the next seven days. It's supposed to be wet in the month of January with the average total just under 5".

A Chilly Inauguration Day In D.C.

As all eyes turn to Washington D.C. tomorrow for the Presidential Inauguration, the forecast looks quite chilly. Highs will stay in the 40s in D.C. tomorrow. A few light snow flurries are possible early in the day, but the sky may clear out some as the Inauguration begins.

It will be quite a windy day in Washington as well. Gusts over 30 mph are likely.

Dry Start To 2021 – Rain Chances Increasing In the Next Week

We haven't said this in a long time. "It's a dry start to the year." I literally recall  getting flooded out in 2019 and 2020 with so much rain in the Tennessee Valley. I still remember Alabama Highway 101 north of Town Creek flooding out because of so much winter rain. It happened two years in a row! So far, we haven't had anything close to that. Here is a…

‘I’ll kill them all’: Florida deputy accused of threatening feds at US Capitol

‘She did not die from COVID’: Son says cause of mother’s death inaccurate

Can COVID-19 vaccines be mixed and matched?

DHS: Biden administration will pause some US deportations for 100 days

Psaki vows to bring ‘transparency and truth’ to press briefings