During the overnight hours Monday, November 5 into Tuesday, November 6, 2018, a tornado was confirmed via radar imagery which showed correlating signs of rotation across various radar products.

Shear rate and velocity products showed strong signs of rotation, and another radar product called correlation coefficient showed signs of debris being picked up by the storm.

How are tornado debris signatures (TDS) used to detect tornadoes?

The correlation coefficient (denoted below as “CC) is newer dual-pol doppler radar product that allows meteorologists to detect objects that are different in size. This change of size within the objects shows up as a brighter orange or even blue/green within the pink areas — the pink signifies objects of roughly the same size and shape, but the orange/blue/green areas signify areas where objects are different sizes and shapes. 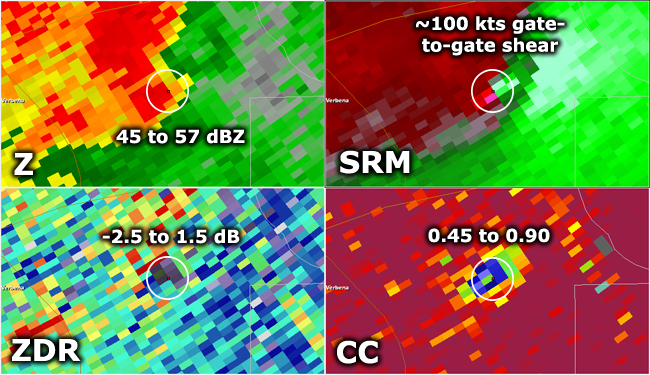 This means the radar is detecting objects that are not rain that may be embedded within the rain itself. These objects could be broken tree limbs, leaves, pine needles, and possibly remnants of houses or buildings in the event that a tornado hits these structures. 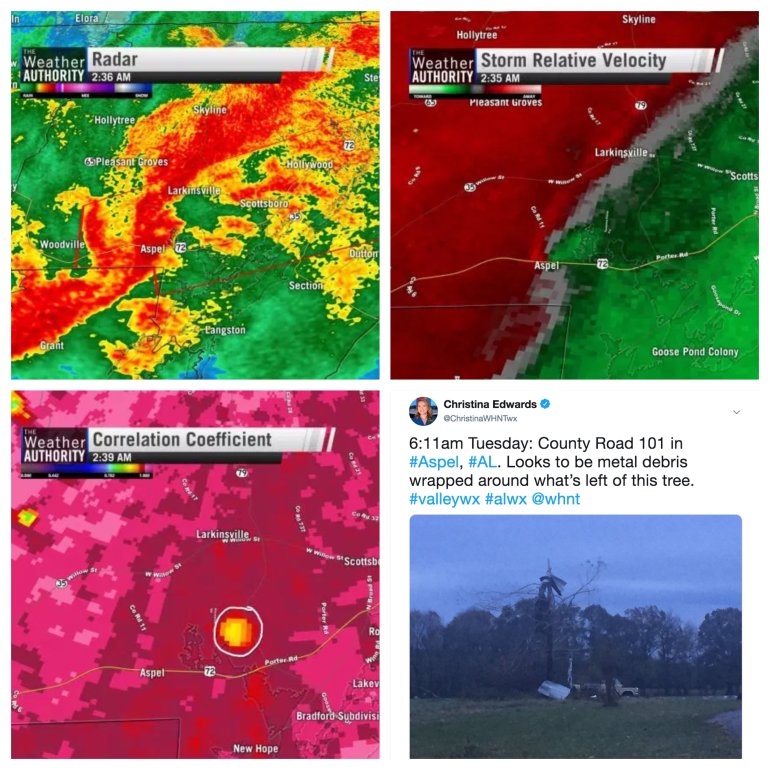 A tornado debris signature is often what is used by the National Weather Service when they issue “radar confirmed” tornado warnings. These signatures are very helpful at night when tornadoes are normally difficult to detect, and the TDS is especially helpful for determining rain-wrapped tornadoes embedded within quasi-linear convective systems (QLCS’s, or “squall lines”).

What’s interesting to note about tornado debris signatures detected in the fall is that they can be more “enhanced” due to the larger amount of leaves that are present on trees (and on the ground) compared to the spring time severe weather months. When meteorologists observe TDS on radar products during autumn months, the intensity of the TDS may be enhanced due to the extra leaves and pine needles present during the fall. It is during the post-storm damage survey that the true nature of the storm damage will be realized.

Cool and sunny weekend ahead!

This weekend will be classic early spring weather: cold mornings and comfortably mild afternoons. Temperatures are starting out Saturday in the 30s. But ample sunshine will warm us up into the upper 50s this afternoon.

Sunday morning lows will also dip to around freezing, followed by a big swing back into the low 60s on Sunday afternoon. This is a gentle reminder to not plant anything in the ground that may be sensitive to frosty temperatures!

The drier the weather, the more likely it is to be cold in the morning and warm in the afternoon; that's what we have in front of us for the next week to ten days.

Hard to believe we can go from 19° to 70° in a week, but that is Alabama for you. We've started March in the 50s. Milder air returns this week. One thing to note, it can still get cold in March. We can get snow as well. As far as long duration cold events like we saw in February, it's not happening. Frost is still in the cards as well, so hold off on planting for a bit longer.

Milder temperatures are expected overall for the next two weeks. The average high from March 3-17 is around 63°. The 8-14 outlook is above average for the Tennessee Valley. There are plenty of 60s and 70s ahead! ENJOY!