This year has had a lot of ups and downs rain-wise. As of Wednesday, Huntsville International shows an eight-inch rain surplus on the year; the catch is that we are 2.47” below average since June First! Rain is definitely a ‘what-have-you-done-for-me-lately’ part of the weather.

A foot of rain in February doesn’t matter if you go a long time without a good rain in July and August.

That’s where we find ourselves now. Following two weeks of daily, unevenly-scattered but very heavy thunderstorms, the moisture source is cut off and we see no significant rainfall in our near future.

It’s dry now, and it’s going to be dry for a while to come!

Does this mean we’re going into a drought? No, it doesn’t really suggest major drought; however, the dryness will be noticeable and impactful for agriculture in the next 10-15 days.  The U.S. Drought Monitor shows about 1/3 of Alabama in some form of ‘drought’ this week; only 11% of the state’s land area is in moderate or severe drought. 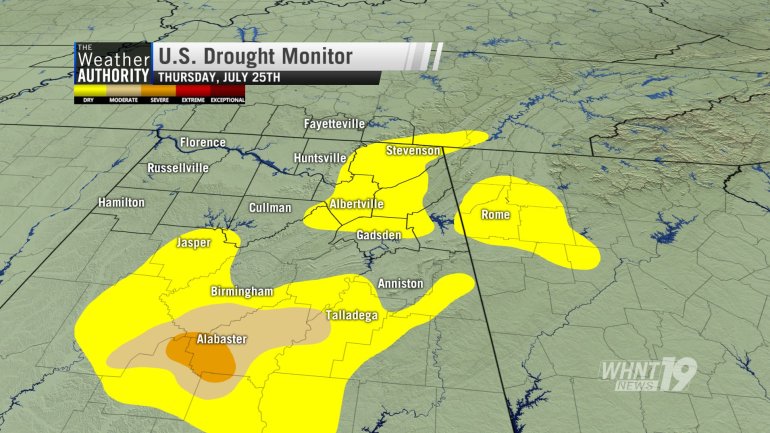 The European model guidance outlines a roughly 40% chance of getting at least one inch of rain through August 8th. Think about that for a minute.

We average about 0.8” of rain per week in late July and early August; that means in a two week period we should have around 1.6” of rainfall based on the averages. It rarely works out to be ‘average’ this time of year, though! Storms develop often; however, they rarely provide an even covering of rainfall, and that leaves us with something like this in the records: as much as seven inches in 1923 (July 25-August 9) to as little as zero in 1999.

We are heading into what is usually the driest time of the year in August, September and October, so we need all we can get when we can get it. The prospects of good rainfall in the short-term are not good; the only exception to that will be those isolated downpours that manage to drop over an inch of rain over a small area.

From gift cards to cash: these fitness apps pay you to get in shape