The remnants of Hurricane Barry are moving north toward Missouri this week, placing the system exactly where it originated over a week ago! Phillippe Papin tweeted out a satellite loop of this track, showing Barry from its start as a MCV over land to its development into a hurricane in the Gulf, to where it is now:

It's been a long 10+ day odyssey since the MCV that ultimately spawned #Barry formed in Missouri.

Here is a long wv loop, with Barry's track overaid in 24h snapshots. Ten days later, the remnants of Barry are nearly back where it started & interacting with a mid-latitude trough. pic.twitter.com/eehCni1sMJ

Barry started near Missouri as a MCV, or Mesoscale Convective Vortex. An MCV is simply a small area of low pressure with associated showers and storms. Berry started as a small feature, and remained relatively small as it travelled from Missouri south down to Georgia. Once the system found itself over the Gulf of Mexico is when it was given the warmth and moisture it needed to expand and strengthen.

The system moved over the Gulf of Mexico on July 10th, became Tropical Storm Barry on July 11th, and then became the first hurricane of the 2019 Atlantic Season on July 13th. 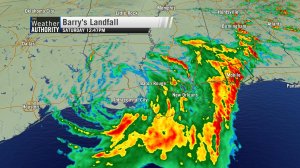 Barry made landfall as a Category 1 hurricane near Intracoastal City just before 1PM July 13th, a mere 3 hours after being upgraded to a hurricane. Barry was very quickly downgraded to a tropical storm again after landfall, but maintained its strength as a tropical storm for around another 24 hours.

Finally, by July 15th Barry had weakened back to a remnant low over northern Louisiana. Now what’s left of Barry is moving north toward Missouri – exactly where the system started its journey!

In its lifespan Barry has brought at least 3-5 inches of rain across portions of southern Louisiana and Mississippi, causing widespread flooding to a region that was already oversaturated to begin with. Complete rainfall totals from Barry won’t be known until the storm has completely dissipated later this week.

Zeta got beat up overnight crossing the Yucatan Peninsula. Winds are at 70 mph as of Tuesday morning at 4am. The system will strengthen in the Gulf of Mexico later today. Zeta moves across the Gulf of Mexico later today into Wednesday as a hurricane. It's still expected to make landfall across Louisiana late Wednesday. IMPACTS ARE THE SAME! It just depends on the exact track of Zeta as the…

Zeta was upgraded to a Category 1 hurricane in a special advisory from the National Hurricane Center.

Zeta now has more symmetric strong convection (thunderstorms) around the center of the storm, and has shown some fairly quick strengthening today. Winds have increased fairly quickly, and pressure is dropping pretty fast too. Zeta moves across the Yucatan Peninsula Tuesday morning, re-emerging into the Gulf of Mexico as a strong tropical storm or hurricane.

Zeta’s Impacts on North Alabama Depend On Track

Hurricane Zeta continues to organize and intensify this morning southeast of the Yucatan Peninsula. As of 1 am, it had sustained winds of 75 mph and a minimum central pressure of 982 millibars.

The storm will continue to move northeast through the Gulf towards the Northern Gulf Coast by Tuesday night into Wednesday morning as either a hurricane or a strong tropical storm. You can keep up with the latest track of Zeta with our interactive map below:

‘Out on the town’: 200-pound tortoise back home after escaping Alabama pen