To say it’s been “wet” during the third week of July is a bit of an understatement: Both Huntsville and Muscle Shoals picked up between 2-4 inches of rain within four days, and there are portions of northwest Alabama/middle Tennessee that received as much as 7 inches within the week!

All of this excess moisture along the ground is adding to the already damp air — and during the afternoons, it feels down right oppressive if a shower or thunderstorm isn’t nearby to cool things off.

When people say “it’s humid outside”, they are referencing the fact that extra moisture is present in the air. The phrase “relative humidity” is more familiar compared to the term “dewpoint”, but humidity can fluctuate depending on the temperature. 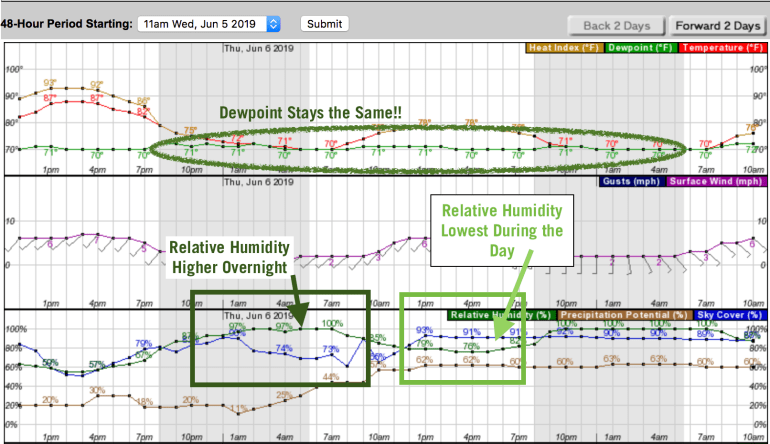 This is why the “dewpoint” is helpful in communicating the amount of moisture in the air: Unless wind is transferring warmer or drier air into a region, the dewpoint is going to stay relatively constant until there is a change in the wind.

What is the “dewpoint”?

The air we breathe consists of a mixture of gases including oxygen, nitrogen, carbon dioxide and water vapor (as well as mix of other trace gases).

When air is cooled to a certain point, the water vapor within the air is also cooled to the point that it can no longer remain in a gaseous state — it then condenses into liquid water, which we call “dew”. 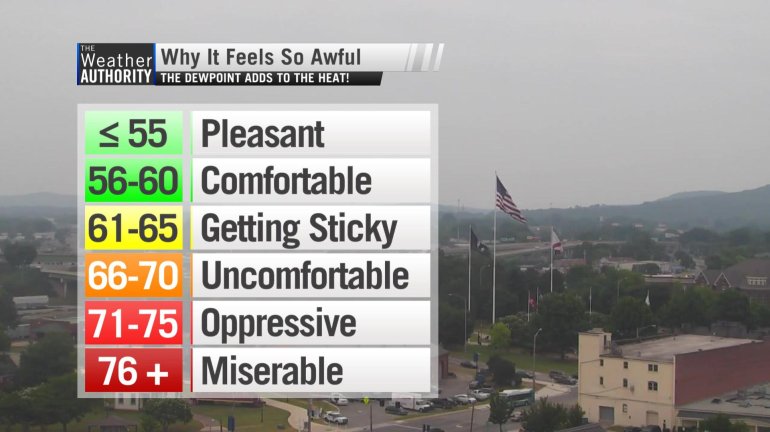 What does the dewpoint have to do with comfort level?

In a nutshell: the higher the dewpoint, the more muggy or “miserable” it feels to be outside. But why? 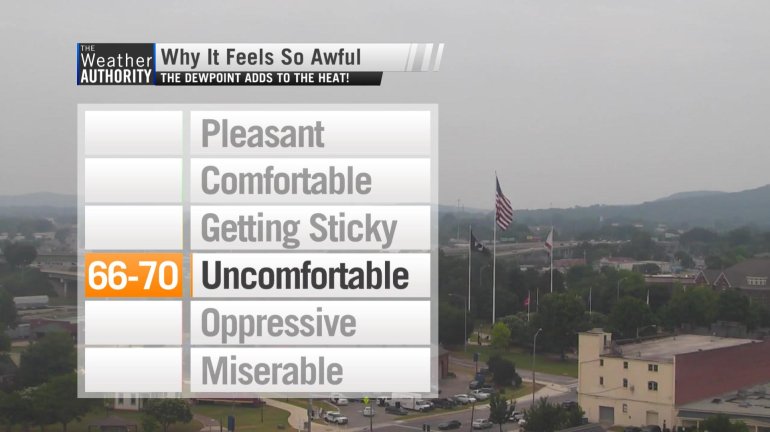 Sweat contains a mixture of salt as well as liquid water — and if the dewpoint is high enough, the water within the sweat won’t evaporate off of your skin. It’s that evaporative process that cools your body: Heat is drawn from your body to the atmosphere when sweat evaporates, causing your body to cool.

So if the dewpoint is too high, the body’s cooling mechanism breaks down — sweat builds up, but its got no where to go. As a result, you feel damp and clammy and…well, miserable.

The dewpoint and you: Your daily forecast

You may not necessarily notice the dewpoint in our on-air presentations, but we do reference it from time to time in some of our tower camera banners.

For the next week or so, dewpoints will be rather high (in the mid to upper 60s) as tropical air continues to flow into the Southeast. This muggy air will continue to provide the possibility of rain showers and thunderstorms for the next several days. For the latest forecast information, check the WHNT News 19 Forecast Discussion.

Heavy rain has fallen in north Alabama, with some locations receiving more than 3 inches of rainfall since early Wednesday morning.

Additional rain is expected through early Friday morning before tapering off Friday afternoon. Click here to read the detailed forecast discussion from the News 19 Weather Authority.

Good Looking Forecasts For College Football This Weekend – It Will Be Warm!

It's finally here! SEC College Football kicks off this weekend! Auburn, Alabama, and Tennessee are in action this weekend. Here is a look at the forecasts games on Saturday. Auburn vs Kentucky - 11am - Jordan-Hare Stadium It's an early kickoff for Auburn and Kentucky this weekend. Temperatures will be in the middle 70s at kickoff with lower 80s in the 4th quarter. Winds will be out of the southwest…

Frost in our near future?

There's no mistaking the change in the weather lately.

This rainy, humid 'blip on the radar' interrupts a nice stretch of cooler-than-average and very comfortable late September weather, but we get right back to it next week!

AP Sources: Pac-12 football to kick off in fall