Throughout the summer and into fall, you may hear meteorologists use phrases that sound like they mean the same thing to describe systems developing over the ocean. These phrases may include

While they all start with the word “tropical,” the phrases are distinctly different from each other.

Per the Atlantic Oceanographic and Meteorological Laboratory (AOML), a branch of NOAA within the Hurricane Research Division, the phrase “tropical cyclone” is a general term for a low pressure system that develops over the tropics and exhibits a definitely closed  center of circulation within the surface winds. The winds of the system swirl cyclonically, or in the counter-clockwise direction, which is why it’s called a tropical cyclone.

Keep in mind that the phrase “tropical cyclone” can describe tropical depressions, tropical storms, and even hurricanes. However, tropical disturbances are not  included because disturbances often lack a closed center of circulation. 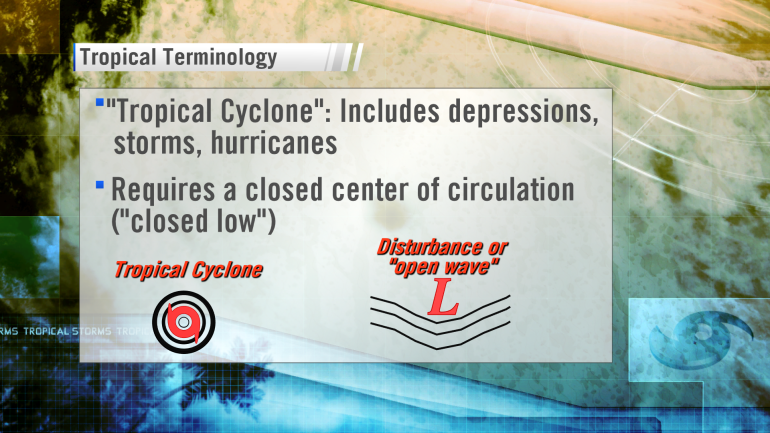 What is a tropical disturbance?

According to the AOML, a tropical disturbance is defined as “a discrete tropical weather system of apparently organized convection – generally 200 to 600 km (100 to 300 nautical miles) in diameter – originating in the tropics or subtropics, having a non-frontal migratory character, and maintaining its identity for 24 hours or more. It may or may not be associated with a detectable perturbation of the wind field. Disturbances associated with perturbations in the wind field and progressing through the tropics from east to west are also known as easterly waves .”

Essentially, tropical disturbances can be described as a disorganized cluster of thunderstorms that form in the tropics. Often they do not cause much concern with the exception of localized heavy rain and flooding in the event that they move onshore. If a tropical disturbance is able to become more organized and show signs of low-level spin, then it may strengthen and develop into a tropical depression.

What is a potential tropical cyclone (PTC)?

All low pressure systems are cyclones (because the winds rotate around the low in the counter-clockwise direction; the term “cyclone” has been used to describe low pressure systems since the 1800s). In that sense, all of the following are “cyclones”: tropical depressions, tropical storms, hurricanes, typhoons, etc.

In the case of the tropics, the National Hurricane Center began issuing advisories in 2018 for tropical systems that have yet to truly form and meet the criteria to be classified as a depression/storm/hurricane, BUT have the potential to become one and produce impacts within 24-48 hours.

However, it has the potential to quickly strengthen and produce wind/flood/surge impacts, which is why the NHC has issued advisories for the Potential Tropical Cyclone.

What is a tropical depression? 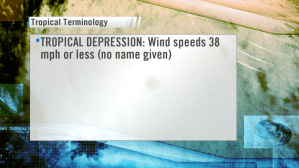 A tropical depression is a tropical cyclone in which the maximum sustained wind speed measured is up to 39 mph.

What is a tropical storm?

A tropical storm is a tropical cyclone in which the maximum sustained wind speed exceeds 39 mph but is less than 74 mph. 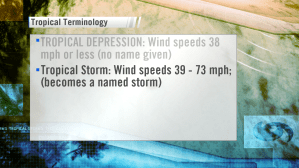 If a tropical storm were to strengthen to the point where it produced wind speeds of 74 mph or greater, it would be upgraded to a hurricane and maintain its name. 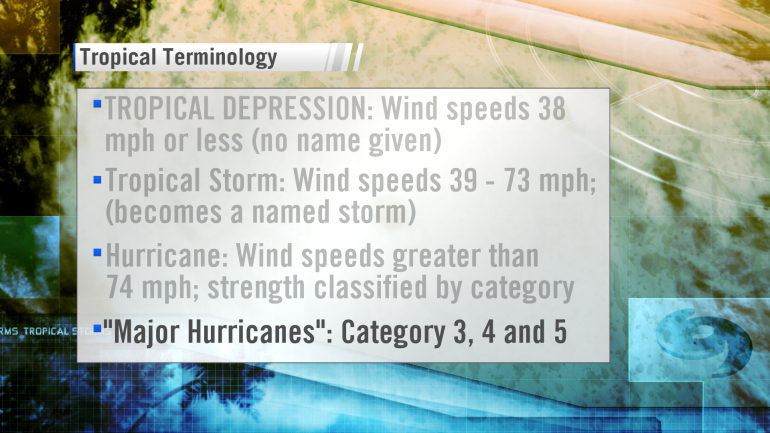 Stormy Weather To Kick Off Next Week

An early week cold front will trigger thunderstorms across the Southern U.S. Sunday and Monday. This has been something we've had our eye on for a little while. As an upper level disturbance lifts northeast from Southern California through the Southern Plains and into the Midwest, a surface low and trailing cold front will trigger showers and storms. On Sunday, the Storm Prediction Center has outlined part of the Southern Plains for the potential for some severe storms, with the main threat being strong straight line winds. The highest risk will be in Northeast Texas and Southeast Oklahoma near the Red River.

At first glance, this system meets some of the criteria we would look for in a potential winter weather setup here. Lapse rates (vertical temperature change), wind profiles, surface temperature and moisture, and a strong low level jet all would support the potential for stronger storms here as well. However, we have some additional limiting factors here that look to prevent our weather from being quite as volatile as Texas and Oklahoma's.

Lawmakers threatened ahead of impeachment trial