All eyes are on the Caribbean Ocean as Invest 97-L continues to churn west. 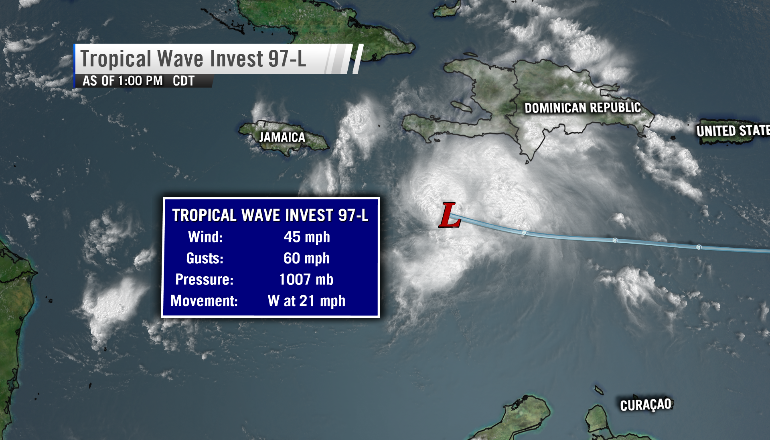 As of 2 p.m. EDT (1 p.m. CDT), the center of the tropical system was located 275 miles east-southeast of Kingston, Jamaica. It is moving west at 20 mph, and it is expected to maintain that path over the next few days, eventually making its way to Mexico.

As of this writing, Invest 97-L looks well organized on satellite imagery, but it requires a closed center of circulation in order to be classified as a tropical cyclone (essentially, a closed off low). Until then, it is considered a tropical wave associated with a cluster of thunderstorm activity.

UPDATE: Hurricane Hunters were scheduled to fly through the system Monday afternoon to determine the location of the center of circulation as well as maximum sustained wind speeds. However, the Hurricane Hunters had to turn around and fly back to mainland due to mechanical issues aboard the airplane.

At this time, it is unknown as to when the Hurricane Hunters are schedule to reattempt a fly through of 97-L.  The purpose of the Hurricane Hunters’ mission is to provide reconnaissance  of the storm. If they are able to detect a center of circulation as well as sustained winds of 39 mph or greater, then 97-L would become a tropical storm and it would be given the name Earl.

Elimination of conference games could have ripple effect