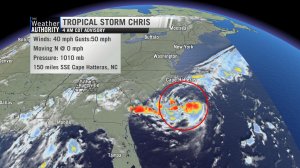 Chris is not expected to develop quickly, but could still manage to strengthen into a hurricane by midweek. At this point the upper-level wind flow would help usher the storm off to the northeast and out to sea.

Chris will primarily bring impacts to the East coast from Georgia through the Mid-Atlantic, with enhanced rainfall and rough seas. Small craft advisories and rip current statements have been issued for the coast of North Carolina.. 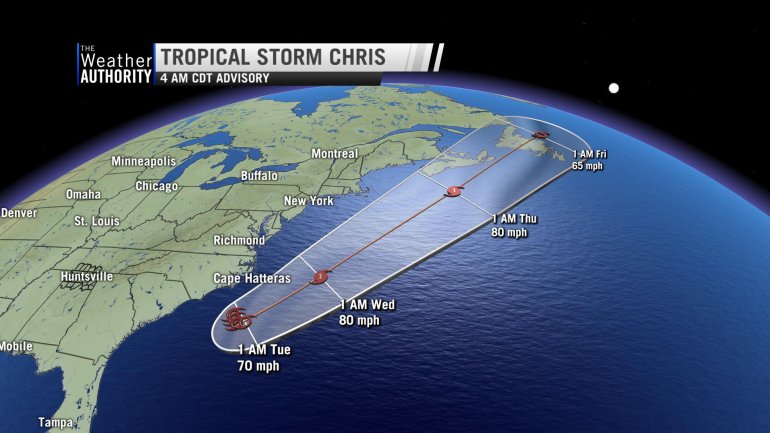 Interests along the coast of North Carolina should monitor the
progress of this system.

DISCUSSION AND OUTLOOK
———————-
At 500 AM EDT (0900 UTC), the center of Tropical Storm Chris was
located by an Air Force Reserve hurricane hunter aircraft near
latitude 33.0 North, longitude 75.5 West. Chris is forecast to
meander off the coast of the Carolinas for the next several days.
An acceleration toward the northeast is expected to begin on
Tuesday.

Data from an Air Force Reserve reconnaissance aircraft indicate that
the maximum sustained winds have increased to near 40 mph (65 km/h)
with higher gusts. Additional strengthening is forecast, and Chris
is expected to become a hurricane by mid-week.

Tropical-storm-force winds extend outward up to 60 miles (95 km)
from the center.

HAZARDS AFFECTING LAND
———————-
SURF: Swells generated by Chris are expected to increase and affect
portions of the coasts of North Carolina and the mid-Atlantic states
into early next week. These swells could cause life-threatening
surf and rip current conditions. Please consult products from your
local weather office.

WIND: Winds to gale force not directly associated with Chris are
expected along the North Carolina coast and over Pamlico and
Albemarle Sounds during the next day or so.

The Tennessee Valley experienced a very warm and very muggy weekend for the final days of February, with afternoon highs reaching 75 degrees in Huntsville and 79 degrees in Muscle Shoals on Sunday.

However, a cold front pushing through the Southeast is bringing the region back to reality Monday, and temperatures will drop a whole 10 degrees from the upper 50s Monday morning into the upper 40s through the afternoon!

Prince Philip moved to another hospital to be treated for infection