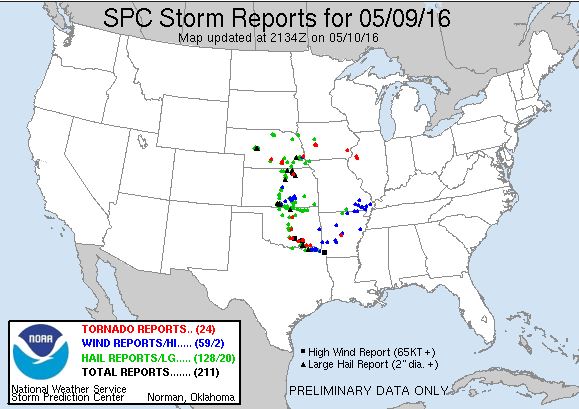 One particular tornado showed anti-cyclonic circulation, which is very rare. In the northern hemisphere (where we live), the majority of tornadoes spin in a cyclonic, or counter-clockwise rotation.

However, a small percent of tornadoes do exhibit anti-cyclonic rotation, meaning they spin in a clockwise rotation. The cause of this is still under research, though it is thought that with so much turbulent flow occurring in the tornadic atmosphere, rotation in different directions will randomly form.

Survey teams also found a 12 mile long damage path associated with an anti-cyclonic tornado from N of Sulphur to N of Roff.

Katie tornado (W of I-35) and Sulphur (E of I-35) both high end EF3. Sulphur tornado was one mile wide at times according to survey.

Reminder: The Enhanced Fujita scale is based off of tornado damage, not size or visual impressiveness

A misconception has been running rampant lately in the weather community. During severe weather events when a tornado is present and traveling on the ground, some meteorologists and storm chasers will label the tornado as an “F-something” or “EF-something” while the tornado is still en progress.

That’s actually “bad meteorology,” because the Enhanced Fujita (EF) scale is based off of the damage the tornado produced, and the EF rating can only be deduced after the tornado has dissipated and the National Weather Service has assessed the damage. The National Weather Service damage survey assessment list is rather long and complex, but the details are available here on the Storm Prediction Center’s Frequently Asked Questions page.

For example, a mile-wide tornado may look particularly impressive in the middle of a large corn field, but if there are no buildings for it to damage, then it would likely receive a lower EF rating. Conversely, a thin ropey tornado may hit a major population area, creating damage to substantially built houses and businesses that may garner a higher EF rating.

This misconception came to the forefront in 2013, when a record-breaking large tornado hit the town of El Reno, Oklahoma. Within the span of one minute, the tornado grew from being a mile wide to 2.6 miles wide, making it the widest tornado on record. Despite hitting and killing numerous travelers stuck on the Oklahoma interstates, the tornado struck a relatively rural area, and it only created damage that corresponded to wind speeds of approximately 136 to 165 mph, or an EF3 tornado.

However, two research radar vehicles were within a few miles of the El Reno tornado, and some of the data scans showed wind speeds as high as 295 mph — on par with an EF5 tornado. However, because the wind speeds were sampled from radar and did not correspond with damage assessments, El Reno’s official EF rating stands at EF3.

Keep this in mind the next time you see tornado videos and reports swirling around social media. Reserve using the term “EF” until after the National Weather Service has performed the damage survey and released its assessment.

Gabby Petito’s family begs Brian Laundrie’s family for info on disappearance: ‘Put yourselves in our shoes’

NORTH PORT, Fla. (WFLA) - Family members of 22-year-old Gabby Petito, who went missing during a cross-country road trip she had been on with her fiancé Brian Laundrie, addressed Laundrie's parents in a letter on Thursday that was read by a family attorney.

Attorney Rick Stafford, who represents the Schmidt and Petito family in New York, read the letter during a news conference Thursday afternoon. The letter addressed to Laundrie's mother and father, called on them to help find Petito.

DALLAS (NewsNation Now) — A surge of new COVID-19 cases are pushing hospital systems to the limit across the country.

In Idaho, health care is now being rationed.

THREE RIVERS, Calif. (AP) — Firefighters wrapped the base of the world's largest tree in a fire-resistant blanket as they tried to save a famous grove of gigantic old-growth sequoias from wildfires burning Thursday in California’s rugged Sierra Nevada.

The colossal General Sherman Tree in Sequoia National Park’s Giant Forest, some other sequoias, the Giant Forest Museum, and other buildings were wrapped as protection against the possibility of intense flames, fire spokeswoman Rebecca Paterson said.

Fence is back as U.S Capitol prepares for weekend protest

Race to raise US debt limit: Republicans say Democrats are on their own

Alabama man gets prison for pointing laser at helicopter