It’s been 19 days since rain fell at Huntsville International Airport. Sure, some have had a little here and there since then, but we have had no widespread soaking rain in weeks. In other words, it’s getting dry out there!

The forecast brings good news: rain returns soon. It stays dry and hot in the short-term; temperatures rise into the upper 80s and lower 90s again on Tuesday with a hazy sky and only a hint of a chance of a brief shower or storm. The chance of rain rises a bit on Wednesday with afternoon temperatures struggling to reach 90ºF, and then our best chance of rain in nearly a month begins Thursday and goes through the first part of next week.

What’s the rain chance? The rain chance – or ‘probability of precipitation – is probably the most misunderstood element of a forecast. Why can you get an inch of rain with a 10% chance and a tenth of an inch with a 100% chance?

The rain chance itself, standing alone, can’t tell you the real expected impact. 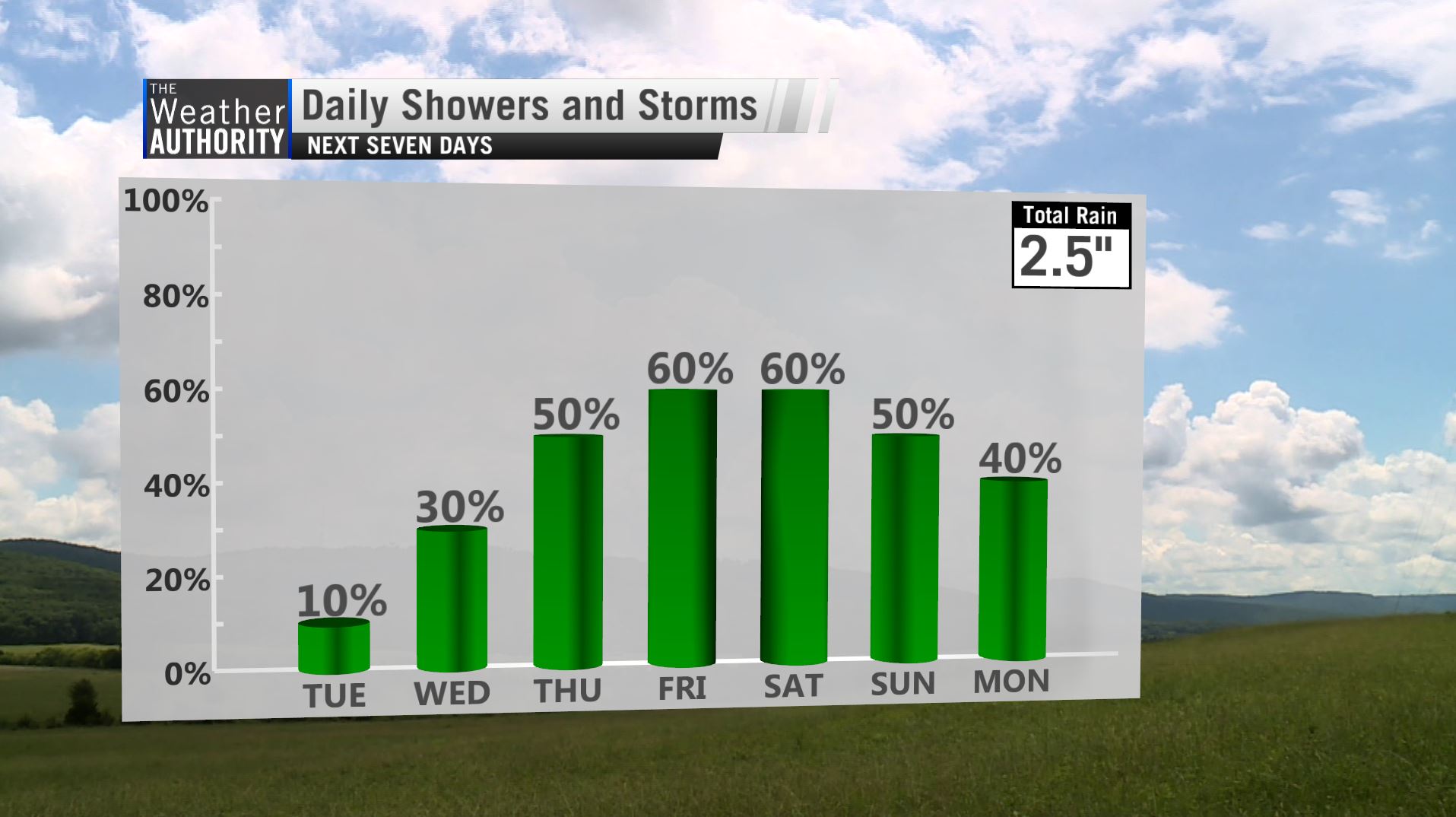 What you see in our forecast this week represents the chance of a single spot in North Alabama and Southern Tennessee getting at least 0.10” of rain in a 24-hour period. It doesn’t have a ‘cap’ on it, so a single thunderstorm developing on a 10% day could drop a tremendous amount of rain in a small area. A 60% chance day could give you a small amount while a number of other communities get 1/2” to 1” of rain or even more.

Summertime thunderstorms are chaotic; they’re often caused by small features too tiny to resolve days in advance. Even when we see an increased chance like the Thursday to Sunday period ahead, there’s still an element of chaos because we don’t expect one big ‘wave’ of rain and storms. Instead of that, we’ll get something that looks more like spilled paint on the radar for several hours each day: uneven coverage, some soaked, some getting next to nothing.

You’ll notice some daily fluctuation in the numbers; that’s because the closer we get to seeing the storms develop, the better view we have of coverage, intensity, and rainfall expectations.

How much rain are we talking here? Some of our guidance suggests a few communities will get more than four inches of rain through next Monday. That’s on the high end; most of us probably get at least 1.0” on the low end to as much as 2.5” on the higher end of average. It won’t all come in one day, and on any given day, you are just as likely to get rain as miss it.

Mexico to fight racial bias by promoting its culture abroad

Filing for citizenship, other benefits becomes more expensive in October

Tracking the Tropics: Isaias continues to strengthen ahead of landfall

Can Congress save the live music industry before it’s too late?