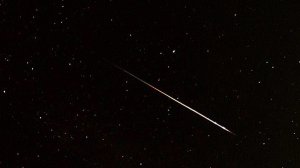 Sunday – July 28th – will be when the shower is at its nominal peak, but you have a good chance at catching sight of a few meteors within a few days of this peak. The best time to look for meteors will be after midnight through dawn.

There is no one direction you should be looking, just lay back and look straight up to see the shower. If you want to follow the meteors path in the sky though, you’ll find they originate from the southern sky near the constellation Aquarius the Water Bearer – this is called the shower’s radiant point. This will best way to know for certain that you spotted an Aquariid meteor, since the Perseid meteor shower is also currently active! The Perseid meteor shower’s radiant point is currently in the northeastern sky, near the constellation Perseus. The Perseid meteor shower doesn’t peak until Mid-August, but you might still see a few meteors from Perseus in the next week too!

The moon will be approaching its New Moon phase over the next week, so viewing will be excellent for either meteor shower. The weather itself is looking good for viewing too! Lows temperatures will slip back into the upper 60s to lower 70s, with dry conditions lasting at least through Monday night.

Where do the meteor showers come from? Meteor showers occur when the Earth passes through the orbital path of a comet. The meteors are debris left behind in the wake of a comet.

Interestingly, the origin of the Delta Aquariids shower is not known in certainty. The comet 96P Machholz is one possible source of the Delta Aquarius. The Perseid meteor shower comes to us courtesy of the better-known comet Swift-Tuttle.

Missouri man freed from prison with help from WNBA’s Moore

1 dead after drowning on Lake Martin in Elmore County

Cops fired over photos of chokehold used on Elijah McClain

1 dead after drowning on Lake Martin in Elmore County