Our first frost advisory of the season was issued Monday morning, and a lot of us walked outside to ice crystals stuck to our grass, windows, and cars for the first time this fall! Plenty of Huntsville communities got their first frost, but Huntsville didn’t *quite* make it to the freezing mark officially. Huntsville International recorded 36°F as the low Monday morning. 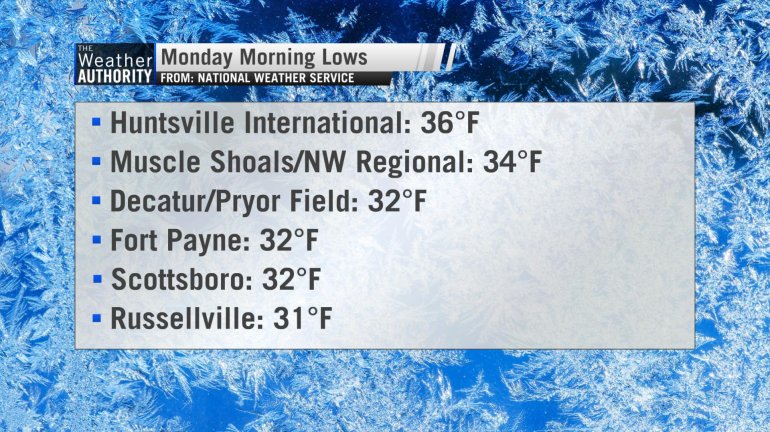 Many other communities did make it to the freezing mark though! Decatur, Fort Payne, Scottsboro, and Russellville all recorded their first light freezes of the season. That puts us right on target for this time of year, as our average first freeze typically occurs between October 20th and November 10th. 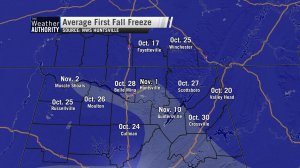 Huntsville’s average first freeze typically arrives a littler later than the surrounding rural communities, but it could be coming soon! Our next shot at seeing a freeze will arrive ‘right on schedule’, at the very end of October.

For context: The range of dates for our first freeze is pretty wide. A freeze within a week of the average is still considered normal. You have to get about 3 weeks away from the average to close in on the records. The record earliest freeze over Huntsville is November 9th (set in 2000), and the latest first freeze on record is December 5th (set in 1978).

If you snap any photos from your first frost of the season share them with us using the ‘submit’ button below!

Zeta's remnants are gone, pushed northeast by a cold front that clears through Alabama today. Behind that front, some much cooler and drier air moves in. Things start to feel like late Fall come Friday, and the Halloween weekend looks pretty nice!

Just when you thought we would get a break in the tropics, another system could develop into a tropical storm later this week. There is a disturbance that tracks westward through the Caribbean Sea in the coming days. The National Hurricane Center gives it a 60% chance of development in the next five days.  The next named storm is "Eta" and this will be an all-time record for named storms…

At 7am Thursday morning, the center of Tropical Zeta is near Asheville, North Carolina. Zeta is 'trucking' eastward and our forecast improves in a hurry. It will be windy on Lookout Mountain and Sand Mountain this morning. Winds still gust to 30 mph at times. The heavier rain is over. Zeta over the middle Atlantic through the late morning and afternoon Look at the all the dry air on the…

News 19 Analyst: If betting the farm, pick Biden, but President Trump still has a chance

Not cooking a bird? Get your deep-fried turkey fix at this fast food joint

Man charged with attempted murder of an HPD officer