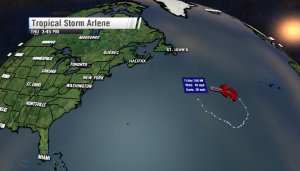 UPDATE AT 4 PM CDT THURSDAY: Tropical Storm ‘Arlene’ has developed in the Atlantic.

‘Arlene’ won’t last long; conditions in the North Atlantic are unfavorable for further development (and too harsh for the storm to maintain it’s strength).

It is no threat to land!  April storm are rare; forecaster Lixion Avila said this about Arlene’s formation:

Classified as a subtropical system, Subtropical Depression One formed in the central Atlantic Ocean about 890 miles west-southwest of the Azores. It produced maximum sustained wind speeds of 35 mph, which is 4 mph below the threshold to be considered a subtropical storm.

Subtropical Depression One is expected to remain short-lived as it slowly drifts north-northeastward through the Atlantic Ocean. No coastal watches or warnings are in effect.

DISCUSSION AND 48-HOUR OUTLOOK
——————————
At 500 PM AST (2100 UTC), the center of Subtropical Depression One
was located near latitude 32.4 North, longitude 40.0 West. The
depression is moving toward the north near 12 mph (19 km/h), and
this motion is expected to continue tonight and early Thursday.

Maximum sustained winds are near 35 mph (55 km/h) with higher gusts.
Little change in strength is anticipated tonight, and the
subtropical depression is forecast to become absorbed by an
approaching extratropical low on Thursday.