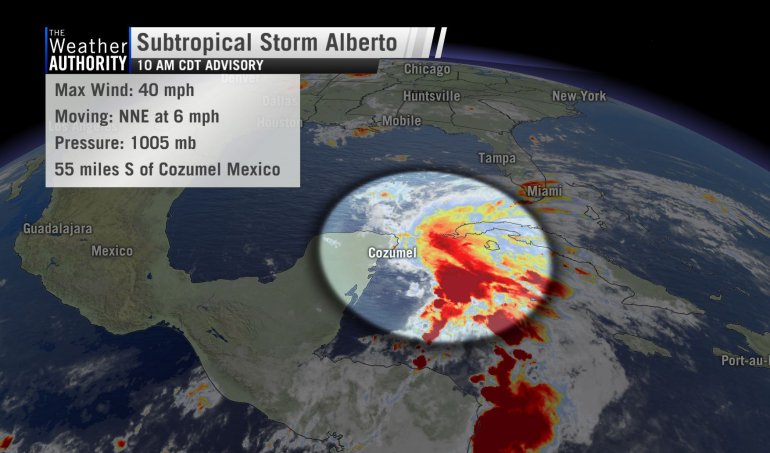 The Government of Mexico has issued a Tropical Storm Watch for the east coast of the Yucatan Peninsula from Tulum to Cabo Catoche.

The Government of Cuba has issued a Tropical Storm Watch for the western Cuban province of Pinar del Rio.

Rainfall accumulations of 4 to 8 inches with maximum amounts of 12 inches are possible across the Florida Keys and southern and southwestern Florida. Heavy rain will likely begin
to affect the central Gulf Coast region and the southeastern United States later this weekend and continue into early next week. Flooding potential will increase across this region early next week as Alberto is forecast to slow down after it moves inland. 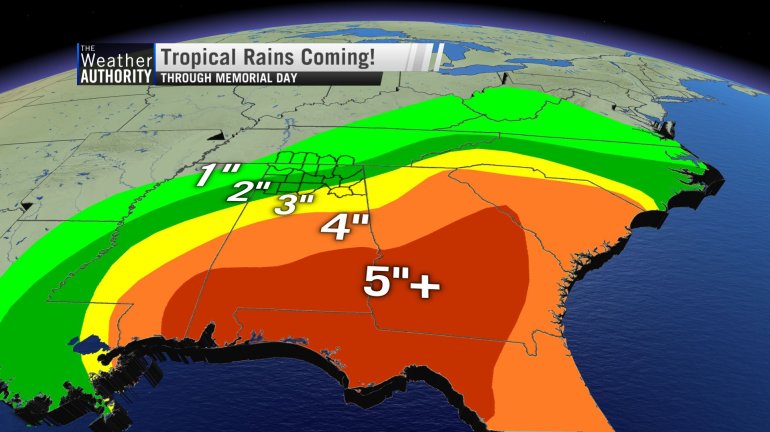 Those drenching rains will also push further north into south-central Alabama and central Georgia. To the east, rainbands will swing heavy downpours and even potential severe storms through central Florida, including Tampa and Orlando.

If vacation plans take you through Mobile, Montgomery, Columbus, Macon or Augusta, be cautious while driving through heavy downpours which may flood interstates as well as surface streets. Anticipate heavier traffic volume while traveling through major traffic hubs like Birmingham and Atlanta.

Heading south for the Memorial Day Holiday? Here’s what you need to know

If you’re beach-bound for the holiday weekend, you’ll want to stay weather aware through Monday, and even extending into the second half of next week:

A Tweet from the National Weather Service in Houston got me thinking about how amazing the world is when we stop and take it all in:

That's right. Some twenty-plus years ago: before my TV roots began as an intern at ABC 33/40 in Birmingham and even before graduating from Mississippi State University, I watched the weather relentlessly.

A 2.1 magnitude earthquake was measured on a seismograph Friday morning 1.8 miles northeast of Courtland in Lawrence County according to the USGS. Anything 2.5 and below normally can't be felt. Did anyone feel anything this morning? Here is a look at the Richter Scale.

After A Rainy Friday, It Will Be A Dry & Cool Weekend

It dries out nicely this weekend, but you will need a jacket! Highs on Saturday only reach the lower 50s with a northwest wind. At least the rain is gone for now. High pressure takes over Friday night into Saturday Here are your highs across the Tennessee Valley on Saturday. We should be in the middle to upper 50s for the first week of December. This  is a little cool…

Huntsville Hospital among first in Alabama to get COVID-19 vaccine

Man charged for Huntsville carjacking that ended in wreck

Christmas and COVID: Therapist on how to manage holiday stress and decisions amid the pandemic