Our average first 90° day in Huntsville (since 1990) is May 20, but we’re nowhere near that today. Highs struggled to get out of the 60s this afternoon (for some of us, they didn’t). That’s thanks to this cut-off low that’s been spinning across the southeast the past couple of days. That’s what has given us the cloudier, cooler, and showery weather. It may be a while before we quite get to 90°, and that’s bucking a trend we’ve seen in recent years.

There’s been a gradual trend for Huntsville’s first 90° day to be a bit earlier. Now, if we look  past  1970, that trend isn’t really there (we had some long summers in the 30s, 40s, and 50s), but if you have noticed a trend of earlier starts to summer-like weather, you aren’t crazy! 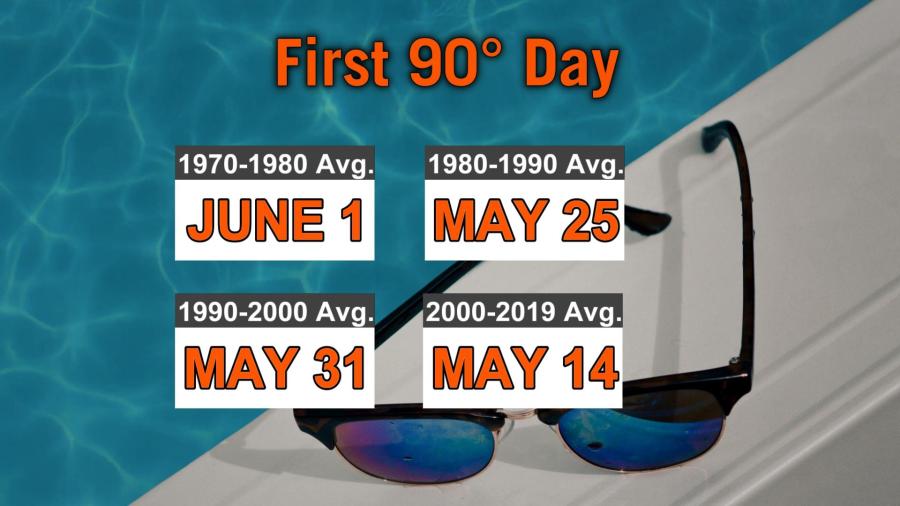 So, what about this year? Well, this year, we will be a bit past average for our first 90° day, but it won’t take too long. We’ve got upper 80s in the forecast this weekend, so in theory if we’re a little warmer we could hit 90° this weekend. If not, we’ll get there eventually. Some years it’s taken up until mid-June to get to 90°. The Climate Prediction Center keeps temperatures around or above average through May 30.

Given that, we’d expect mid to upper 80s through the end of the month, but we will probably have our chances to hit 90° before June. If not, we’ll really be bucking the recent trend of earlier starts to summer weather.