The weather is warming up and plenty of dry days are in the forecast — if you’ve been angling to catch up on some fishing, boating, or general yard work, it’s a good time to do so.

But remember: It is the season to keep an eye out for snakes! Ramona Edwards spotted this particularly large specimen Wednesday, saying

“It might be worth reminding your viewers that it is now snake season!! They can be found anywhere, but especially around rocks. You guys know all of that, of course. This photo was taken at the pond in the center of our apartment complex (no names, please). This bugger was long!! The general consensus is that it‘s a Water Moccasin, but we haven’t ruled out the harmless Brown Water Snake. I figure it’s just best to stay as far away as possible, no matter what kind it is! There was a child playing near the pond’s edge a few days ago and our maintenance guy was picking trash up there this morning!
Blessings
Ramona Edwards
HSV”

I posted Ramona’s photos and comments to Facebook and the Alabama Herpetological Society chimed in,  stating:

“This is a harmless Water Snake. There are a few identifying characteristics that rule out Cottonmouth. Cottonmouths have a sharp ridge above their eyes around to the front of the nose called a Canthus Rostalus that gives the head and nose a very unique shape which this snakes rostral scale is pointed toward the top where as a Cottonmouth is more square. The color of the nose and chin are too light for the typical Cottonmouth…
I did notice a few comments that aren’t completely correct. Cottonmouths do not always swim on top of the water. They are just as capable of swimming under water as other snakes, after all they do eat fish! We normally avoid getting into discussions on these Facebook posts because we don’t want to get into the flaming responses where so many people believe that “the only good snake is a dead snake”. Anyone who feels that way we say to please educate yourselves. If any of you would like to learn more about Alabama native snakes please join us at our Facebook group www.facebook.com/groups/bamaherpid” 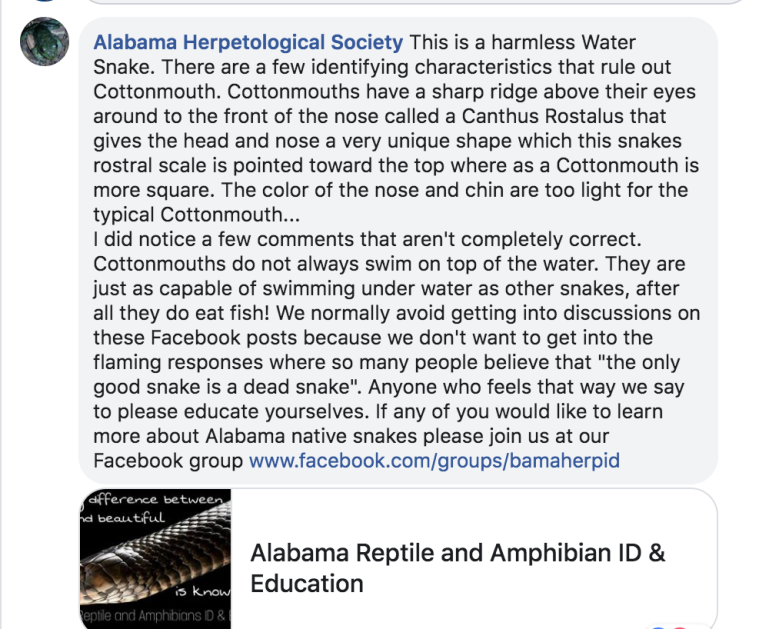 The Alabama Cooperative Extension System states that “on average, about one person dies from snakebite in Alabama every 10 years. This indicates that much of the fear over snakes is not justified.”

The Alabama Cooperative Extension System also says that there are approximately 40 different species of snakes that call our state home. Of those 40 different snakes, only six are venomous:

Different snakes eat and shelter in different areas, depending on the species. Larger snakes dine on rodents (like rats and mice) as well as fish, frogs, and other snakes. Smaller snakes prefer insects, earthworms, and smaller birds or mammals.

Some snakes prefer sheltering in rock piles or wood piles, similar to those found in rural areas and off the beaten path of hiking trails. Others (like the gray rat snake) can climb trees — and if a tree is close to a home, that may mean the snake can take up residence in the attic.

Closer to the ground, larger snakes hunt for rodents and other prey that rummage through brush trash piles. This is why it’s important to keep yards free of trash or lawn debris, and to regularly mow the lawn: Well maintained yards do not provide much shelter or food for snakes, so they tend to avoid these areas.

For water sports and other activities near a river, pond, or other body of water, be mindful of the Cottonmouth, which are large snakes that can grow as much as 5 feet long. They can range in color from solid dark gray to tan with brown bands, according to the Alabama Cooperative Extension System, and there are seven species of harmless water snakes often mistaken for Cottonmouths.

Whether venomous or not, all snakes have a place in the Alabama ecosystem. Snakes eat rodents and other vermin that can harm farms, crops, and city areas as well.

However, it’s understandable that humans don’t necessarily want to share a home, office/industrial building or farmhouse with a snake. And if you are on a fishing trip, be aware of your surroundings in the boat as well as onshore.

If you come across a snake in the wilderness, slowly walk away as many snakes are not “looking for a fight”, but rather are defending themselves.

If you find a snake in your home or building, you may be inclined to kill the snake — but this would not be a good idea. Instead, call animal control immediately so that they can remove the snake for you. Once the snake is removed, determine what is serving as its food source — that way similar snakes are deterred from coming back.

If you or your pet is bitten by a snake, immediate medical attention is necessary. According to Animal Control Solutions, “Antivenin can be administered by hospitals and emergency care centers. It is important to keep the affected snake bitten extremity below the heart. Most snake bites occur on these hands from people trying to capture snakes.”

Awareness of your surroundings is the key to safely enjoying the spring and summer months, especially if you plan to spend many hours outdoors.