Father’s Day featured a few heavy storms in the afternoon, with scorching heat and humidity in between.  Our current weather pattern is one that holds on tight, so Monday brings more of the same! 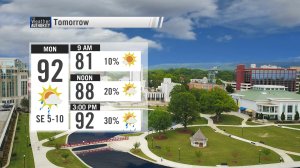 We’ll start off with temperatures in the low 70s near sunrise with some patchy fog possible. Then we’re back into the low 90s by the afternoon with a ‘feels like’ temperature in the upper 90s. That heat and humidity could work together for a few more afternoon storms too, again mainly between 2PM and 6PM.

The Heat Is On! A weak disturbance just above the surface will help kick up hit-or-miss storms again Monday afternoon before moving off to the northeast. With that disturbance out of the way the ridge of high pressure that was over the Southeast last week will build in again. 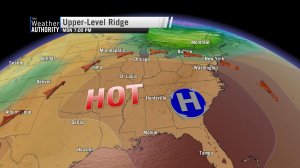 That keeps storm chance slim, but we still can’t rule out a few pop-up storms with the heating of the day Tuesday and Wednesday. With fewer storms around it gets hotter again! Temperatures rise into the low 90s through the middle of the week; when the humidity is factored in the ‘feels like’ temperature climbs into the upper 90s each day this coming week.

Summer Officially Begins: The summer solstice occurs this coming Thursday, but you might already be used to summer like weather! Our weather pattern won’t change much this week either. In fact, the last half of June is looking quite similar to how the first half has gone. 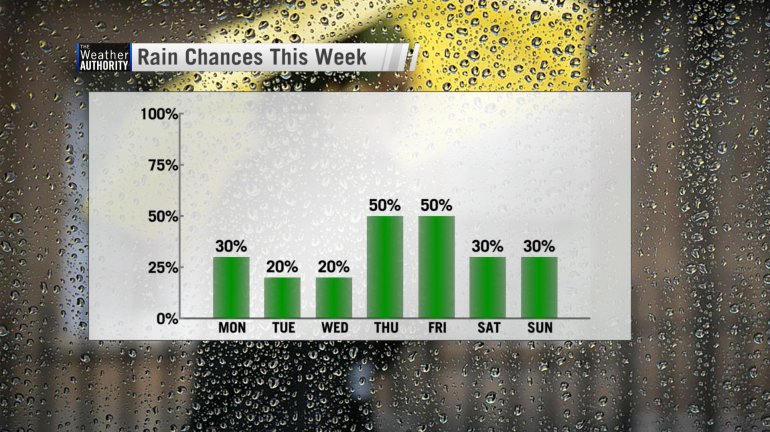 That ridge that helps keep more widespread storms at bay looks to break down through the end of the week. That could open the door to more numerous thunderstorms Thursday and Friday, which would in turn knock high temperatures back into the upper 80s to near 90 each day.

Cool Weather Continues Into Next Week

Things stay fairly cool this week. Temperatures make it into the 70s Tuesday before another cold front brings another round of cold air. We'll have to look out for a frost through mid-week. There isn't much rain in the forecast either. Outside of a stray shower, things look fairly dry.

It's pretty easy to pick out that mid-week cold front in our high temperatures next week. That front pushes through Tuesday night. Behind it, another shot of cold air moves in, with temperatures as much as 15° below normal. We'll have to keep an eye out for some late-season frost Thursday and Friday mornings.

When planning a spring/summer garden in the Tennessee Valley, it's helpful to know the rule of thumb regarding the last frost of the season!

‘Cool’ for a while means no big storms for now!

It's mid-April. There's an anniversary of a major tornado just about every day this time of year. It's the height of tornado season.

But it's not doing anything like that now. How long can we luck out?

“A pillar and stalwart.” North Carolina resident and oldest living American dies at 116

What to Consider When Hiring a Home Inspector

First supermoon of 2021: See the Pink Moon light up the night sky this month

Braves call up Kazmar, who last played in 2008 in majors