Yes, snow! It does happen time to time in the Tennessee Valley, but it’s rare when it occurs in the springtime month of April.

To be fair, the stats below are culminated from climatology reports from the Huntsville International Airport. This means that while the Huntsville airport has only recorded a trace of snow in the entire month of April, other locations within the Valley have likely received much more, but those amounts were not recorded for climatological purposes. 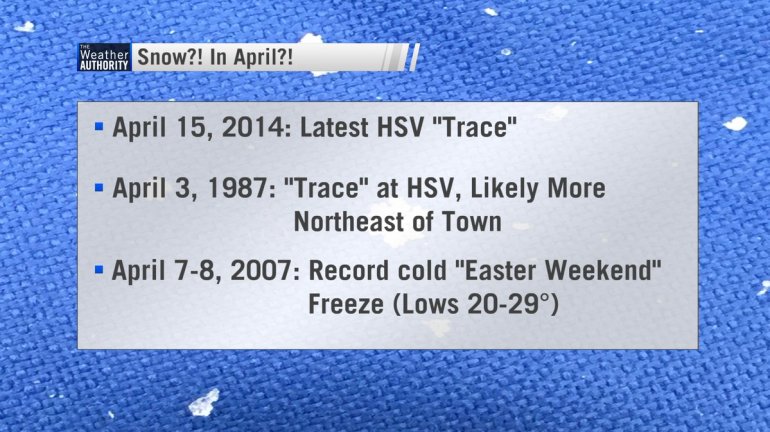 This comes in to play for the April 2-3, 1987 event, when many in Madison County through Lincoln County had significantly more snow than what climatology reports indicate from the Huntsville Airport. One viewer called and explained that she was “playing in much more than a trace” of snow in the Madison County area between Huntsville and Hazel Green. Tim Smith (below) states that a solid inch accumulated in Fayetteville!

In 1987 we had a solid inch maybe more in Fayetteville, but roads were only wet. Melted quickly!

There’s another point of clarification to be made here, as explained by my colleague, Lauren Nash, at the National Weather Service in Huntsville:

“When you are recording the 12z [7am CDT] ‘snow depth’ which is on the daily climate, that has to be rounded to the nearest whole number. So 0.4 would be trace, 0.5 would be 1 inch. So that is where you saw the 0.4 being considered a trace…also…if the snow keeps landing but never accumulates, then it would be a trace.

However, for “daily total snowfall” it can be 0.1, 0.2 etc etc etc. any amount to the nearest tenth.

So I went and also looked for the latest snowfall dates for you. In April, yes it all Traces. Which, by the way, could also be hail. So we have had no “measurable” snow in the month of April. March 25 1940 we had 0.4 inches of snow so that would be the latest measurable snow for Huntsville.

In terms of melting down, there are cases where you can have 0.01 of liquid and more than a trace of snow if it is very dry. ”

Looking Back at the Easter Weekend 2007 Deep Freeze

Temperatures that weekend plunged well into the 20s for both Saturday and Sunday, proving to be a killing freeze for approximately 90 percent of the crops across the Midwest and Southeast, resulting in nearly $2 billion in losses. That particular freeze occurred on April 7-8, 2007, and it was Easter Weekend — proving the adage that you want to wait until after Easter… or even better, wait until after Tax Day!