Who says meteorologists don’t use math? 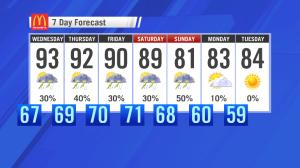 Turns out, there is a lot of statistical analysis that occurs when meteorologists pore over weather data and there is no topic that gets better statistical scrutiny than that percent of rain forecast that you see everyday on the 7-Day graphic.

A sentiment that many meteorologists hear is this:

“The forecast called for a 40% chance of rain and it didn’t rain here. That weather person was wrong!”

Or something like, “The forecast called for a 10% chance of rain which means it wasn’t supposed to rain and it rained here. That meteorologist was wrong!”

When you see information like “30% chance of rain,” the number “30%” actually has a lot of thought put into it. It’s called the PoP or Probability of Precipitation.

The National Weather Service defines PoP as “the chance of precipitation occurring at any point you select in the area.”  And yes, math is involved.

PoP is calculated as follows:

So in a situation in which a meteorologist is highly confident that a small amount of a region will get rain, the PoP may be something like 20% (100 percent confidence that only 20 percent of the viewing area will get rain).

Other times, the meteorologist may have a moderate amount of confidence that the weather set up will cause rain.  But if it does, it will fall over a rather large area. In that case, the PoP may also be 20%, but it’s because the confidence is lower (50%) but the area of potential rain is higher (40%).

When it falls, it can be hyperlocal

Take a look at the image below. On Tuesday, May 31, a few showers over Lawrence and Morgan counties produced measurable rain greater than 0.01″.

But it was so localized, only a few communities were able to benefit from the rain. Moulton and Hulaco were likely the only cities that got appreciable rain; the majority of it fell over the Bankhead National Forest.

In fact, Jason and I crunched (and re-crunched) the numbers: Only 3.8% of Lawrence and Morgan counties received rain from these showers Tuesday afternoon (see image at right to check our work). The radar analysis indicates that these showers did produce a hefty amount of rain: about 0.6″ over the Bankhead Forest and 0.2″ west of Moulton.

Keep that in mind whenever you see a forecast calling for a low chance of rain: Sometimes, when the chance of rain is low, the rain that does develop can be heavy and may impact that area for 20 to 30 minutes. If your plans involve being outdoors during days in which the forecast calls for a 10% chance of rain, have LiveAlert19 on your phone and a Plan B in the event that rain arrives where you live.

(MORE: Check the forecast discussion for the Tennessee Valley)

Tropical Storm Isaias to become a hurricane before landfall in the Carolinas, tornado watch issued

Lawmakers at a standstill over COVID-19 relief: ‘We’re not close to an agreement yet’

Parents share concerns about returning their kids to school