The second topic we tackle during severe weather awareness week is flooding. Flooding is often underestimated as a serious threat, but according to the National Weather Service, floodwaters claim more lives than any other thunderstorm-related hazard. In fact, it is the second most deadly weather event across the nation (just behind heat-related fatalities).

There are a lot of types of flooding, and a lot of flood watches, advisories, and warnings to address them. We’re going to break each down for you below:

flash flooding: Flash flooding occurs when floodwaters accumulate quickly and with little to no warning.

Flash floods are particularly dangerous because they can generate a large amount of water in a short amount of time, often that overflow into homes or roadways.

Of the fatalities the National Weather Service attributes to flooding, over half occur when a vehicle is driven into hazardous floodwater; the next highest percentage of flood-related deaths is due to walking into or near floodwaters.

Keep the following facts in mind the next time you encounter flood waters:

Flood alerts come in various forms, including but not limited to:

A flood advisory is issued when a flood event warrants notification due to significant disruption or inconvenience, but is less urgent than a warning.

A flood watch is issued when conditions are favorable for flooding to occur in the short-term future. In this case, the watch is typically issued several hours to even days ahead of the onset of the flooding event.

A flood warning is issued when floodwaters may pose a serious threat to life or property. A flood warning may be issued several hours to even days in advance of the onset of flooding. Flooding that occurs near a river usually contain river stage (ie, crest level) forecasts.

A flash flood watch is issued when conditions are favorable for flash flooding, and it can be issued several hours to even a few days ahead of time.

During a flood WATCH, be sure to monitor your weather radio or Live Alert 19 app for any changes in weather conditions. If you live in a flood-prone area, consider relocating to a safer place (such as a friend or family member’s home) until the flood threat has ended.

During a flood WARNING, act immediately to ensure your safety. If you are outdoors, head for higher ground; if you are on the road and you encounter floodwater, turn around and either find a different route or move to a safe place until flood waters have receded. 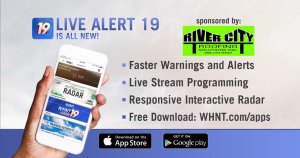 If you witness any damage due to flooding, wait until the danger passes and then snap a picture through the Live Alert 19 app (you can also email us a photo@whnt.com). Please be sure to include your name and city/town/location. Your damage reports help ensure that forecasters at the National Weather Service as well as at WHNT News 19 provide the most detailed record of what occurred from the flood, which helps improve our forecasting abilities for future storms.

Chance For Tropical Development In Caribbean This Week

The National Hurricane Center is monitoring the potential for the development of a broad area of low pressure off the coast of Central America later this week.

Models do suggest there is some potential for some tropical development in the Northwestern Caribbean later this week as well.

A strong cold front crosses the Tennessee Valley today bringing heavy rain, lightning, and gusty winds to the area. Storms move into the Shoals around mid-morning, cross I-65 through Madison County through the early afternoon. Expect rain for Sand Mountain by the late afternoon. Here is another look at the timing for today: 2pm4pmAll late evening11am - northwest Alabama Don't be surprised if we get a few severe storms this…

Rain arrives Monday, then drying out for the rest of the week

North Alabama and south Tennessee experienced a thorough soaking last week, and it looks like drenching rain is in the forecast for Monday.

A cold front will provide the “lift” necessary for sparking widespread showers and a few thunderstorms Monday morning through Monday evening.

Hundreds of cars, motorcycles driving around I-469 in ‘Circle the Fort’ Trump Rally