Clouds thickened Friday afternoon, and a cloudy sky keeps it milder overnight; expect lows in the upper 30s and lower 40s  instead of low-20s.  The ‘warmer’ air doesn’t make it feel much warmer, but it will prevent rain from becoming a messy winter storm like the one developing from Missouri to Kentucky, Ohio, and eastward the Atlantic coast this weekend.  Up to a foot of snow falls in the St. Louis area tonight and Saturday! 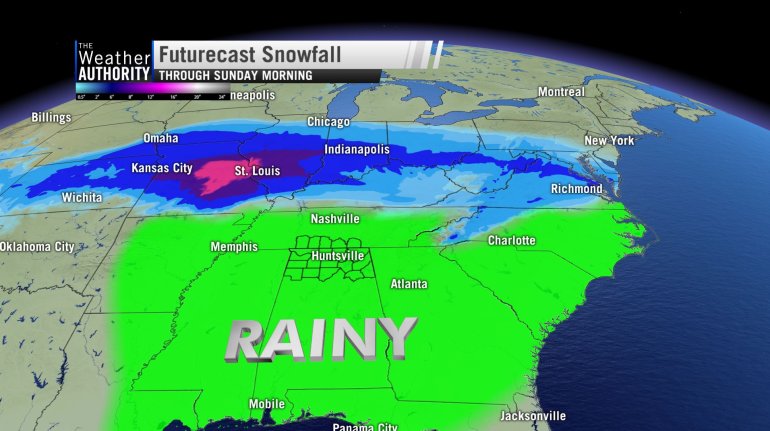 Around here, it’s just a steady, cold rain.  Showers begin Saturday morning between 6 AM and 9 AM, and the rain gets more persistent and widespread through the afternoon.

The ‘heaviest’ and most widespread rain happens between 1 PM and 8 PM Saturday leaving around 1/2″ to 1″ of total rainfall by midnight.  More showers stick around through Sunday, but it looks so light that we won’t add much more than a few hundredths to a tenth of an inch of rainfall by Sunday night.

It will definitely be chilly this weekend!  Expect highs in the 40s with a southeast wind up to 25 miles per hour Saturday; Sunday’s breeze turns to the northwest at up to 15 miles per hour with a high in the upper 40s.

It’s the million dollar question ever since our warm-up started in December.  November was cold: 4.8ºF below normal (18th coldest November out of 111 years of reliable Huntsville records).

Since then, it’s been warmer!  The anomaly (difference from average) since December 1st:  +4.4ºF.

The past 30 days show up as close to 6-8ºF above average for most of Alabama.

So is there a chance this will reverse itself?

There is more evidence building in favor of colder weather for the end of January and beginning of February, though. 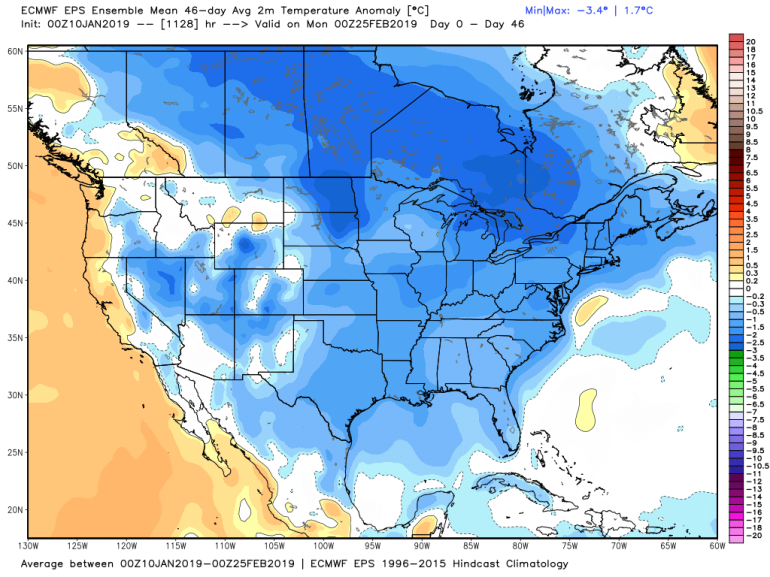 That’s not an ‘extreme’ outlook, but there’s a roughly 10-day period involved here from now through the 21st in which temperatures could spike well-above average again. Factor that in, and a look like this looks even colder for the end of January.

The weak El Niño in the Pacific should begin to affect the atmosphere and the jet stream a little more in the next few weeks (that usually helps get it colder here in the winter months).

Deterministic models (the ones that get shared showing a blizzard in one frame and then the next day nothing) are pointing toward – with some consistency – a stormy, cold pattern for late January. It’s too far out to know anything specific, but it would not be surprising at all to see a threat of snow as far south as Mississippi, Alabama and Georgia between January 20th and 25th. If it doesn’t snow, that wouldn’t be a shock either; however, this is all we have to go on looking that far in the future: a chance, not a lock-down guarantee.

So, if you have a hankering for some snow, you will have to head for Missouri or the Ohio River Valley this weekend…unless you just want to take your chances and wait it out around here.

There’s really no such thing as expecting ‘normal’ snow around here. It’s either feast or famine. Is this the year with a good one?

I’d say our chances are pretty good at getting at least 1-2″ of snow before winter is over this year.

Tropical Depression 11 has formed in the Atlantic this afternoon.