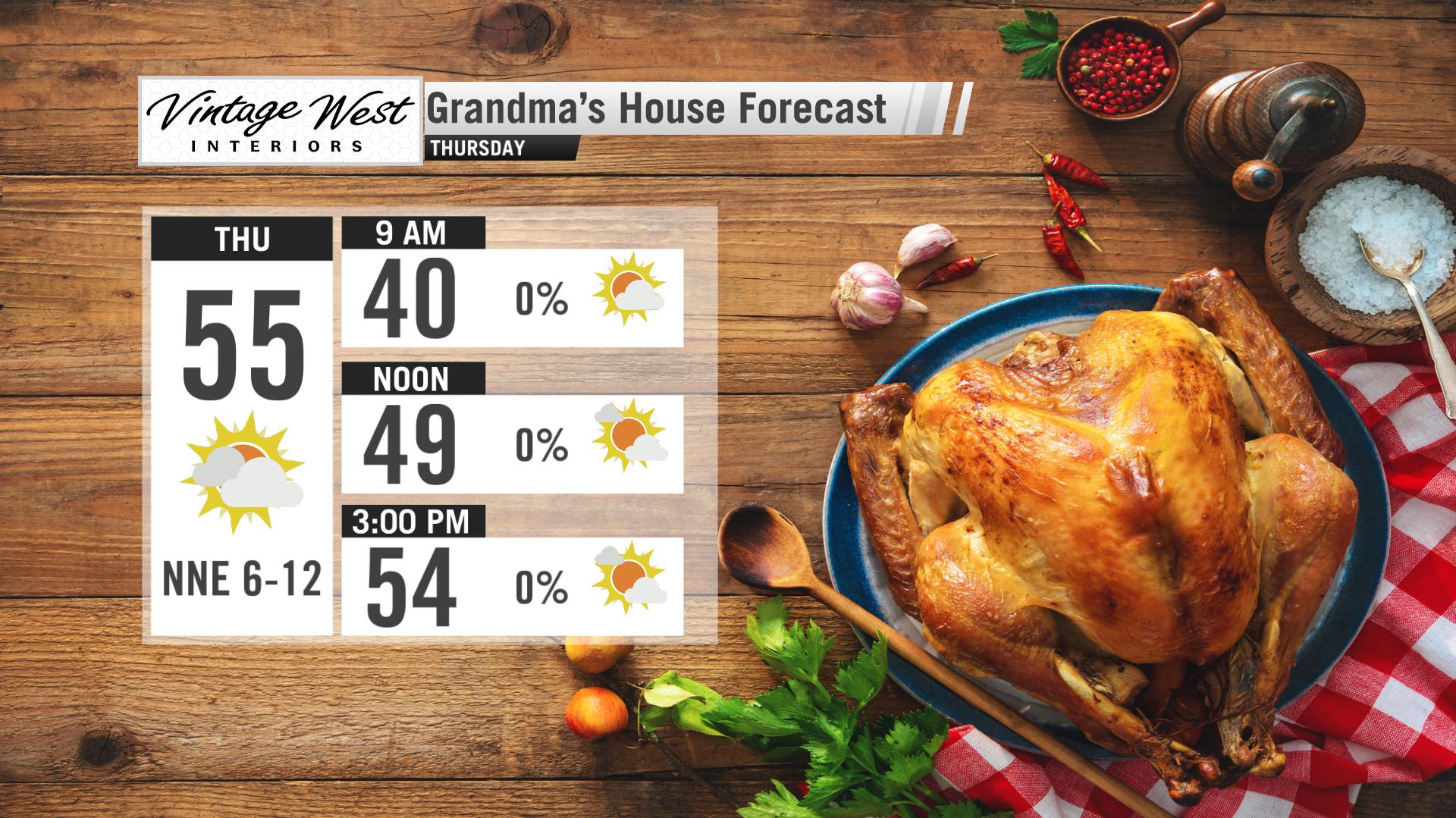 Friday brings more clouds and a chance of a few light showers, but the weather looks cooperative for Black Friday shopping in North and Central Alabama as well as Middle Tennessee. Showers become a little more of an issue late Friday night into Saturday.

Weekend outlook & Iron Bowl update: The next big round of rain and storms moves through on Saturday. Timing is everything with this one! The rain is coming, and storms are more likely than not; however, what we cannot see clearly yet is the timing and how it could impact shopping, Christmas decorating, or the Iron Bowl.

Be ready for some rain through the day, but our best chance in North Alabama comes from around 1 PM to 10 PM. The Storm Prediction Center outlines a region southwest of Alabama where severe storms are possible Saturday. We’ll have a lot of dynamics (wind) but not much thermodynamics (fuel) with this system; the result should be similar to what happened Tuesday night into Wednesday morning: windy, wet weather with no really substantial risk of severe storms in North Alabama and Tennessee. 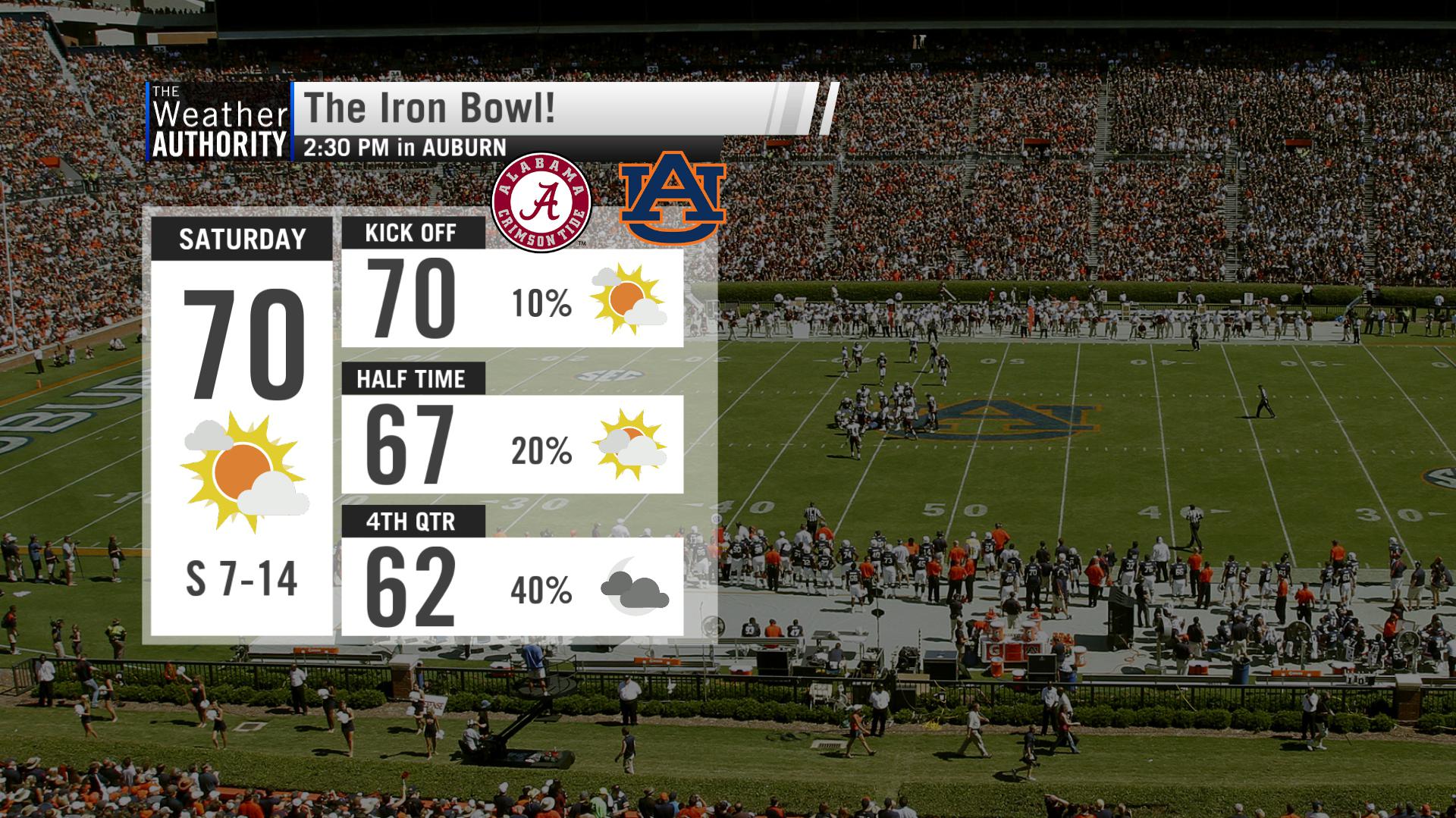 Quick Arctic punch A surge of Arctic air parked over Canada for the next three days gets moving again on Sunday behind a sprawling November storm system (the one bringing us another wave of rain Saturday/Saturday night). As that passes, the Arctic air gets pulled south behind it, and that sets up a cold Monday!

What’s that look like?  This animation shows a strong Arctic high (in red) stalled over Canada through the weekend as a deep, strong low moves across the Central U.S.  As that low passes, a ‘chunk’ of that Arctic air wraps around behind the low and moves into Alabama and Tennessee bringing a big chill to start next week!

Expect highs in the 40s with a wind chill in the 30s on Monday. We’ll get a freeze on Tuesday and Wednesday morning followed by some ‘moderation’ (a warm up that isn’t really all that warm) toward the end of next week.

There is still a lot of uncertainty (unanswered questions) about just how the rain and storms develop next week. We expect a lot of rain, but the medium-range model guidance is all over the place with the timing, intensity and placement of the severe weather threat.

We'll start the week with rain - and maybe some thunder at times - on Monday. Rain gets heavier on Tuesday, and temperatures surge to the upper 60s and lower 70s Tuesday.

There will be enough instability (fuel) for some storms, but the primary severe weather threat Tuesday likely stays west of Alabama. The Storm Prediction Center has highlighted parts of Texas, Arkansas, Louisiana, and Mississippi for the potential for severe weather on Super Tuesday.

We could see some strong or severe storms late Tuesday into Wednesday, but the modeling is in poor agreement beyond 3-4 days out right now, meaning we aren't all that confident in our severe weather threat here. It's something to keep paying attention to, but it's possible all we get out of this is a heavy rain event.

The flooding threat, at this point, looks more significant. Models are still in disagreement over how much rain we could see, but I'd expect a minimum of 2-3 inches of rain next week, but there's the potential for 5 or more inches if certain things play out right.

Miss the snowflakes earlier today? You will have another chance this evening! A batch of rain and snow showers moving in from the northwest brings about 60 to 90 minutes' worth of rain drops and snowflakes between 8 PM and midnight. Don't worry, though! Temperatures remain well above freezing (upper 30s to lower 40s) as the flakes fly.

Total precipitation (rain/snow) Friday evening looks small: around a trace to 0.10" in most communities with no 'significant' accumulations of snow.

The weekend ahead looks good! It's the end of one month and the start of another, and in the weather world we think SPRING as of March First; that's when the weather pattern is often more like Spring than Winter.

There are at least 4 COVID-19 cases in the US that are not travel-related, officials say