Winter arrives at 4:23 PM Friday at the time of the Winter Solstice!

It’s been WET lately. Huntsville has 6.21” on the month of December so far; the thirty-year average is only 5.77” for the whole month, so yes, it has been unusually rainy over the past three weeks. We get a break from the soaking wet weather for a few days, but we can’t completely escape a chance of some rain here and there on Sunday and again on Christmas Day (Tuesday).

Clouds break up some Saturday, and temperatures rise into the lower 50s in the afternoon. Sunday looks a little wetter again; a weak disturbance passing with a cold front brings a few showers now and then from sunrise through early afternoon. Expect highs around 50ºF to 55ºF Sunday afternoon.

Christmas Eve will be cool and dry; expect some sunshine at times between clouds. Another disturbance passing overhead Monday won’t have enough moisture to work with for a chance of rain, and the set-up for Christmas Day looks mostly dry as well: only a 10% chance of a shower. 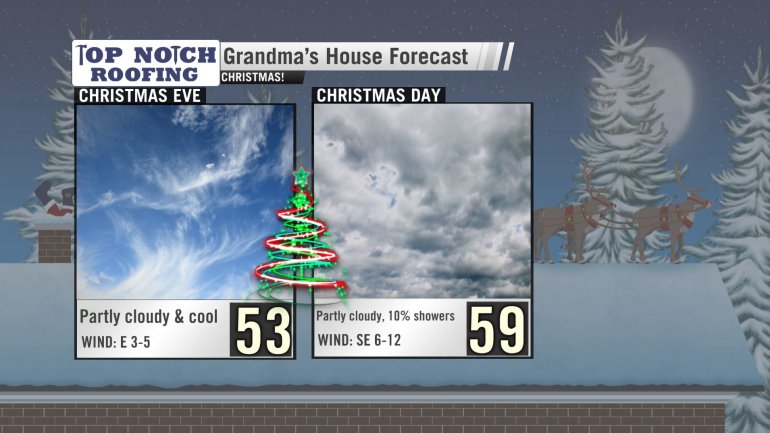 The historical odds of a White Christmas in North Alabama are around one percent. It’s 4.5% for a high over 70ºF and about 25% for substantial rainfall (more than 0.10”). We’ll miss all of those targets this year: no snow, no really ‘warm’ air even though it looks fairly comfortable in the 50s, and no heavy rainfall. A few spotty showers are possible, but most of us won’t see a single drop of rain again until Wednesday night or Thursday.

There will be some snow left in the Great Smoky Mountains, though!  Mount Leconte may have a huge snow on the ground leftover for Christmas Day, but the rest of Tennessee and North Alabama looks like a normal late December day!

Sixties, seventies and storms? Quiet weather through Christmas Day turns wetter and uglier later in the week. Some scattered showers develop on Wednesday evening, but the next ‘good’ soaking comes on Thursday. Longer-range model guidance suggests air warm enough to push temperatures to around 62ºF Wednesday and near 70ºF on Thursday. That kind of warmth this time of year makes it ‘feel stormy.’ And it may get stormy on Thursday.

Don’t let your guard down next week! We can have rough weather in late December. It’s too early to tell if this is going to be one of those nasty days or if it’s just going to rain a lot.

Either way, we expect a lot more rain: 1-2” between Wednesday and Friday of next week. That would put us close to 8” of rain on the month, and as big as that sounds, it’s nowhere near the wettest December on record in Huntsville! That was 18.68” in 1961.

Need some rain? Abnormally dry weather extends into next week

It's been tough to get the rain you need lately for some.

That's in Lauderdale County a few miles northwest of Florence.

What were those ‘rings’ on the radar this morning?

I look for this curious feature on the radar every morning:

Within the span of 60 minutes, a few “donut rings” developed over Winchester as well as the Arsenal in western Huntsville.