Take a look at this video sent to WHNT News 19 by Karisa Landers in Park City, Tennessee.

Boom! That bolt of lightning struck the house, setting it ablaze.

Karisa says that this lightning strike occurred well after the strongest of the winds and the heaviest of the rain moved through her region. It was lightly raining at the time, but bolts that occur during stratiform rain can be just as strong — and potentially deadly — as the beginning of the storm.

Within fifteen minutes, the house was engulfed in flames.

Pausing the video on key frames, it seems that the lightning hit the edge of the house, and it appears that the electricity traveled down the rain gutter.

The Lincoln County Sheriff’s Office says that the no one was home when the lightning strike occurred, but the fire was so extensive that the house it is “a total loss”.

Fire at Foxwood Drive in Park City during lightning storm this afternoon. Thankfully no one home, but house was a total loss. #severeweather pic.twitter.com/WHKweUQe0T

Be aware of the dangers of lightning 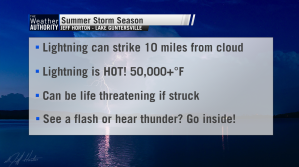 Lightning happens so frequently that it is easy to forget how dangerous a strike can be.

Remember that lightning can strike the ground as far away as 10 miles from the parent cloud. We call those ‘bolts from the blue’, and they can be the most dangerous strikes because people assume that the rain hasn’t arrived or it has already left.

Lightning is very hot, and it can rapidly heat the air around it to 50,000 degrees — that sudden heat causes a shock wave which we hear as thunder. It also explains why lightning can make trees explode and catch houses on fire.

Lightning is a build up of static electricity between the cloud and the ground. It is an electrical current, which means it can be life threatening if it strikes you.

If you see a flash of lightning or hear a rumble of thunder, that is your cue to go to safety immediately.

If your house sustains a lightning strike, be alert for potential fires that may develop within the roof or other structures within the building.

Impacts Locally From Cristobal: Highly Dependent On the Track

Cristobal Moves Through the Gulf This Weekend Tropical Storm Cristobal will bring heavy rain, gusty winds, and rip currents along the Gulf Coast this weekend as the system makes landfall Sunday night into Monday. But what about here in the Tennessee Valley? It's a tough call on what will happen or what may not happen here. Let's breakdown some scenarios and rules with land falling tropical storms and hurricanes. Sunday…