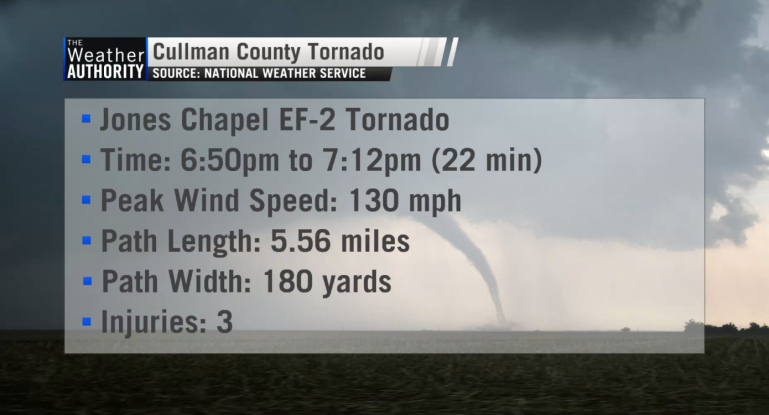 A survey team with the National Weather Service in Huntsville determined that damage in Cullman County was due to a strong EF-2 tornado with peak winds of 130 miles per hour that touched down Friday evening.

According to the official Public Information Statement released by the National Weather Service in Huntsville, the tornado was on the ground for 5.56 miles and was as wide as 180 yards.

The NWS survey team notes that the tornado originated in Winston County and continued into Cullman County. Damage was consistent with an EF-2 tornado with peak winds of 130 mph near Jones Chapel.

According to the National Weather Service:

“The tornado that originated in Winston County continued into Cullman County. Damage was consistent with an EF-2 tornado with peak winds of 130 mph near Jones Chapel.

As the tornado crossed into Cullman County, the vortex likely lifted shortly after crossing CR 1069 after producing minor limb damage. The tornado likely touched down again west of the CR 1055 and CR 1082 intersection. Extensive tree damage was observed. Numerous trees were either uprooted or snapped as the tornado tracked through a depression on the north side of CR 1055.Intensity was documented as 90 mph (EF-1) as it approached CR 1082. At this point, the tornado likely lifted again as it moved east of CR 1082 with only minor limb damage observed through Sullivan Creek.

Peak intensity of the tornado was observed along CR 1091, west of CR 1114. A one year old manufactured home was completely destroyed as it broke away from its anchors, causing 3 injuries. The home was perpendicular to the winds, facing due west. It was displaced about 20 yards from its original location.

Three of four corner anchor units were ripped from the ground. The forth remained lodged in ground but the metal strap was ripped from the I-Beam.It is worth noting that the anchors were approximately 2-3 feet into the ground, and were strapped to the I-Beam (from what could be observed). However, given the highly saturated, muddy soil, the anchors were pulled out as the home tipped backwards. Given this potential failure, winds were estimated at 130mph, or slightly above the expected value for a completely destroyed manufactured home.

Additionally, near this location, several trees were uprooted. Peak width of approximately 180 yards were also documented in this area.

As the tornado tracked east, another area of downed branches and uprooted trees were noted east of CR 1107. This was the final location of observed damage as the tornado likely lifted and eventually dissipated along CR 1114.

Cullman County EMA officials say a 14-year-old, a 3-week old infant, and their mother were all injured during the tornado. All three were occupants of a mobile home and the mobile home is “totally destroyed.”

Limbs and trees down on County Road 1114 between Jones Chapel and West Point after last night’s storms. @simpsonwhnt @HarmonyWVTM13 pic.twitter.com/jjvbmANUKo

The EMA unable to confirm the extent of the injuries sustained by the infant, but the mother and older child sustained injuries that are not life-threatening including minor cuts and scrapes. They are being treated at Cullman Regional Medical Center ER.

The Cullman County Sheriff’s Office reports storm damage on CR 1114 and CR 1107 and asks that you please avoid the area.

The EMA and warned anyone thinking about going “sightseeing” after the storm to stay inside. There are reports of downed power lines and other significant damage in the area.