The National Oceanic and Atmospheric Administration (NOAA) has released their 2019 outlook for the upcoming Atlantic hurricane season, which leans toward a near-normal season. 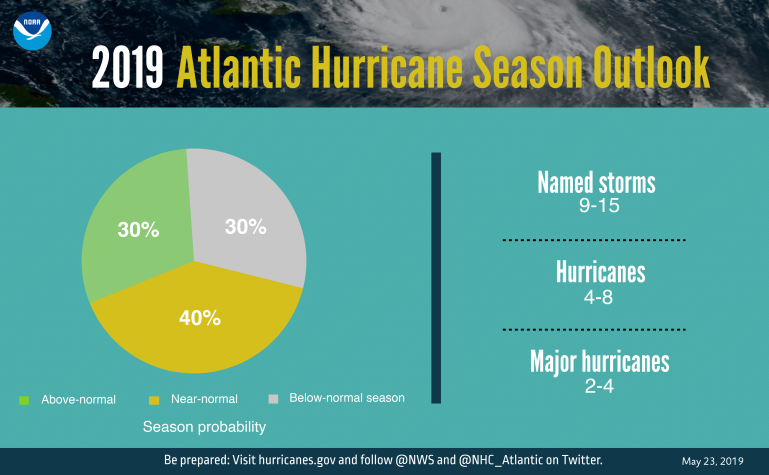 With a 40% chance of occurrence a near normal season is most likely, but NOAA also notes a 30% of an above-normal season and a 30% chance of a below-normal season. While there are numerous factors that contribute to NOAA’s outlook, there are two factors in particular that influenced the outlook this year: sea surface temperatures and an El Niño pattern.

Warmer than average sea surface temperatures over the Atlantic favor storm development. The warm waters offer more fuel for developing storms, which would push for an above average season.

These two competing factors lead us to even chances of an above average and below average season, while also leaning the overall outlook to near-normal.

Te be very clear: NOAA’s outlook is for overall seasonal activity and is not a landfall forecast. You should always make the appropriate preparations for each season regardless of the official outlook.

Daniel Kaniewski, Ph.D., the FEMA deputy administrator for resilience emphasized the importance of readiness for any hurricane season:

“Preparing ahead of a disaster is the responsibility of all levels of government, the private sector, and the public. It only takes one event to devastate a community so now is the time to prepare. Do you have cash on hand? Do you have adequate insurance, including flood insurance? Does your family have communication and evacuation plans?

(MORE: What You Need To Know On Hurricane Preparedness)

NOAA, the National Hurricane Center, and the National Weather Service are continuing to expand their own preparedness efforts this year. The 2019 hurricane season marks the first time NOAA’s fleet of Earth-observing satellites includes three operational next-generation satellites, NOAA’s Hurricane Hunter Aircraft will collect higher-resolution data from upgraded onboard radar systems, and the NWS is currently planning an upgrade to their Global Forecasting System. All of these upgrades are to help generate the best possible forecast to help citizens prepare for the weather.

If a tropical system develops that could impact the Tennessee Valley WHNT will of course have it in our forecasts on-air and at whnt.com/forecast