September 15th is the ‘average’ final 90-degree day of the calendar year in Huntsville.  That doesn’t mean we are always finished with that kind of heat by mid-September, but it’s a good guidepost in framing our expectations for the waning days of the summer season. 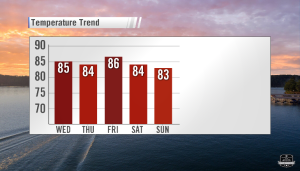 Sunday’s 96ºF, Monday’s 95ºF, and Tuesday’s high in the mid-90s mark the hottest stretch of weather since a heat wave in late July.  The cold front coming in Tuesday night into Wednesday morning swiftly breaks the back of the heat and leaves us feeling fine for a few days including for the first night of high school football!

Will Tuesday’s official high of 94ºF be the final 90-degree day of 2017?  It’s not likely, but it’s definitely possible.  Most model guidance hints at below-average temperatures through September 22nd (the Autumnal Equinox).  Huntsville’s average daytime high temperature falls to 89.8ºF on August 30th, so it’s not unheard of to end the oppressive heat a little early!

It’s reasonable to think we have at least one or two more days in the 90s through the end of September, but if you’re a fan of pumpkin spice, cool nights, and all things Fall, you have to like your odds of saying good-bye to the 90s after Tuesday!

Very Cold Weather On The Way

A serious cold snap is on the way!

Temperatures start out in the 40s Monday morning, but quickly drop into the 30s by the afternoon with a wind chill in the 20s. By Tuesday morning, temperatures are in the low 20s, which is cold enough to cause some problems. With temperatures dropping that low Monday through Wednesday morning, it's time to talk about the 4 "P"s again.

Quiet Saturday, but we’re setting up for a Sunday soaker!

Fast-paced weather changes are the name of the game this time of year, and that's what you can look forward to this weekend and next week!

Drier air leaves us with some afternoon sunshine Saturday, but the air stays cool: highs in the 50s with a light northeast wind. It's a good day to be outdoors raking leaves if that's on your plate; take advantage of the time because the environment gets a lot more hostile for that from Sunday into next week.

It gets cold again tonight: expect lows in the upper 30s by sunrise Friday. Black Friday starts cold and dry. Clouds thicken through the day, and some spotty showers are possible in the afternoon and evening; even with the clouds, daytime highs manage to climb into the 64°F to 69°F range.

Showers pass through ahead of a cold front Friday night into Saturday morning, but our next good chance of a soaking rain holds off until Sunday.