June 1 is the traditional start of the Atlantic Hurricane Season, and already the National Hurricane Center is monitoring a broad area of thunderstorm activity in the Bay of Campeche off the coast of Mexico.

There is a moderate chance that the thunderstorm activity will develop into a true tropical system, however it is not expected to impact the region along, nor be of much concern to the Gulf Coast. However, if travel plans take you to the coast of Mexico, you will want to monitor the surf conditions for rough swimming waters as well as the potential for soaking rains and lightning.  Check in with weather forecasts on a daily basis in the event anything forms while you are away — and have a “what to do” plan in case tropical advisories are issued for your area.

If this system were to strengthen and receive a name, it would be called “Barry”. This is because the “A” name on the 2019 Atlantic Hurricane list of names was already used for a weak cyclone that developed on the Atlantic back in May. 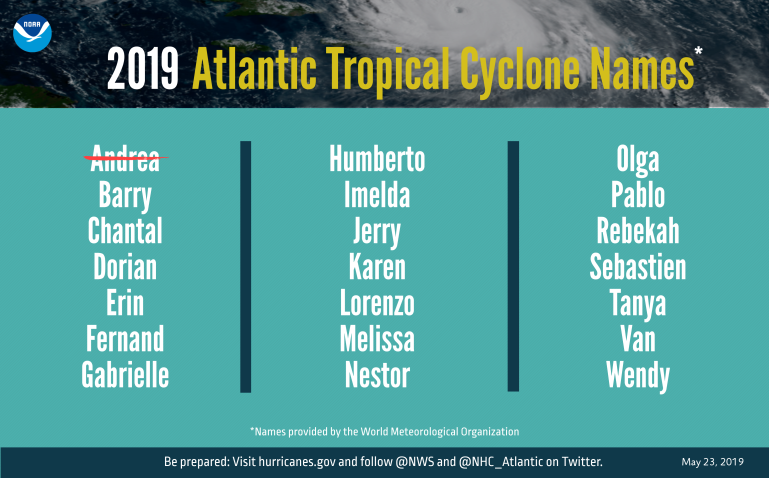 The discussion from the National Hurricane Center can be found below:

For the North Atlantic…Caribbean Sea and the Gulf of Mexico:

1. Shower and thunderstorm activity associated with a broad area of low pressure located over the southwestern Gulf of Mexico has decreased since yesterday and remains disorganized.

This system could briefly become a tropical depression before moving inland over northeastern Mexico later today or tonight. Regardless of development, the disturbance will likely produce heavy rainfall over portions of eastern Mexico, southeastern Texas and the Lower Mississippi Valley during the next few days.

An Air Force Reserve reconnaissance aircraft is scheduled to investigate the disturbance later today, if necessary. Interests along the Gulf coast of Mexico should monitor the progress of this system.

For more information about the rainfall threat in the United States, please see products issued by your local forecast office and the Weather Prediction Center.