However, the region is still racking up a rainfall deficit of about 1 inch for the month, and thankfully, rain returns to the forecast for many in the Tennessee Valley.

In addition to the beneficial rain, we anticipate afternoon temperatures to dampen a few degrees as increasing cloud cover helps to block the heat from the sun. The silver lining to the storm clouds will be temperatures limited to the low/mid 80s.

Daily Storm Chances: A southwest wind will keep Alabama open to warm, humid air from the Gulf throughout the week. At the same time, the jet stream will settle near the Tennessee Valley. The end result is that multiple waves of showers and storms will be able to track over Alabama in the next several days. 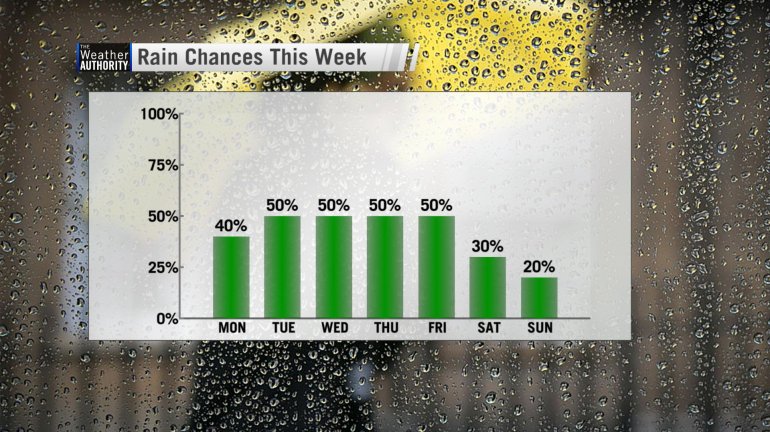 No day looks like a total wash-out, but scattered here-and-there areas of rain and storms will be possible from Monday through Friday. The best chance of storms each day will come during the afternoon, from 12PM-6PM. From Monday through next weekend, as much as 1-1.5 inches of total rainfall is possible for the Tennessee Valley region. 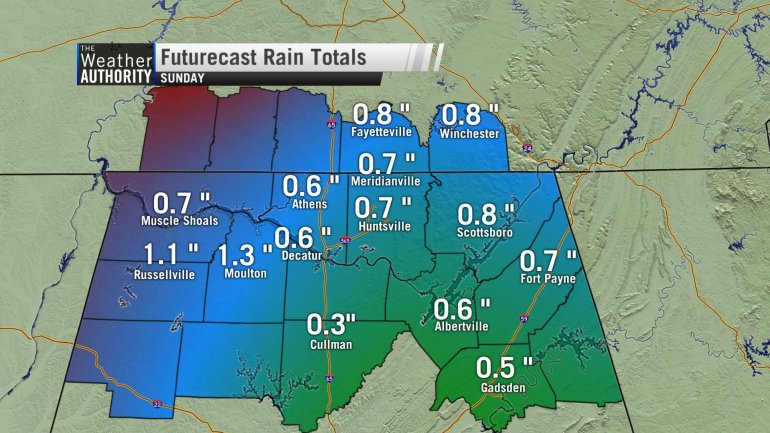 Severe Risk? We don’t have a well-developed storm system coming that would support widespread severe storms. We do however have just enough heat and moisture for a few severe storms to be possible this week. Basically, severe storms aren’t likely but they are possible — the main impacts would be gusty, potentially damaging winds as well as small hail.

Since storms can strengthen quickly during the heat of the day, just be sure that any outdoor plans can be brought in quickly if a storm develops nearby.

Temperatures Trending Downward: As mentioned, the increased cloud cover will put a damper on the amount of sunshine that is able to back the region. As a result, afternoon temperatures will linger in the low to mid 80s. 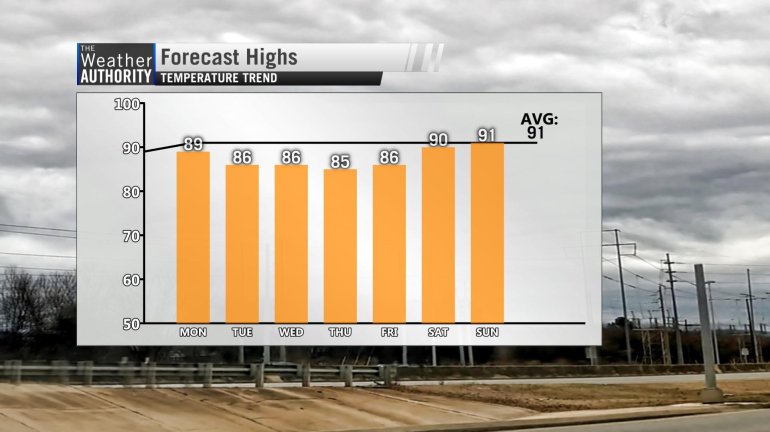 It will still feel rather icky outside, as the thick humidity acts as a wet blanket to stifle any evaporative cooling that occurs when skin sweats. Even with the lower air temperatures, if you work outside or have to do any strenuous activity for long amounts of time, be sure to budget extra “cooling breaks” in an air conditioned area in order to allow your body time to cool off.

By the weekend, high pressure moves in from the Atlantic. That will lower our rain chances and increase temperatures Saturday and Sunday. Highs by then return into the lower 90s.