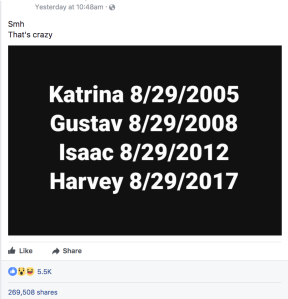 The original Facebook post showed up on my newsfeed Tuesday night when it was shared by a well-meaning friend.

By Wednesday afternoon, it had been shared by nearly 270,000 people.

But the information in this post is confusing, and may actually be wrong.

So what’s the problem here? Four hurricane names are listed within the Facebook status, along with four different dates. What do the dates signify: Landfall? Impact to a region? Formation of the tropical entity?

Since Hurricane Katrina made landfall in Louisiana on August 29, 2005, it is assumed that the other hurricanes made landfall on the same date. 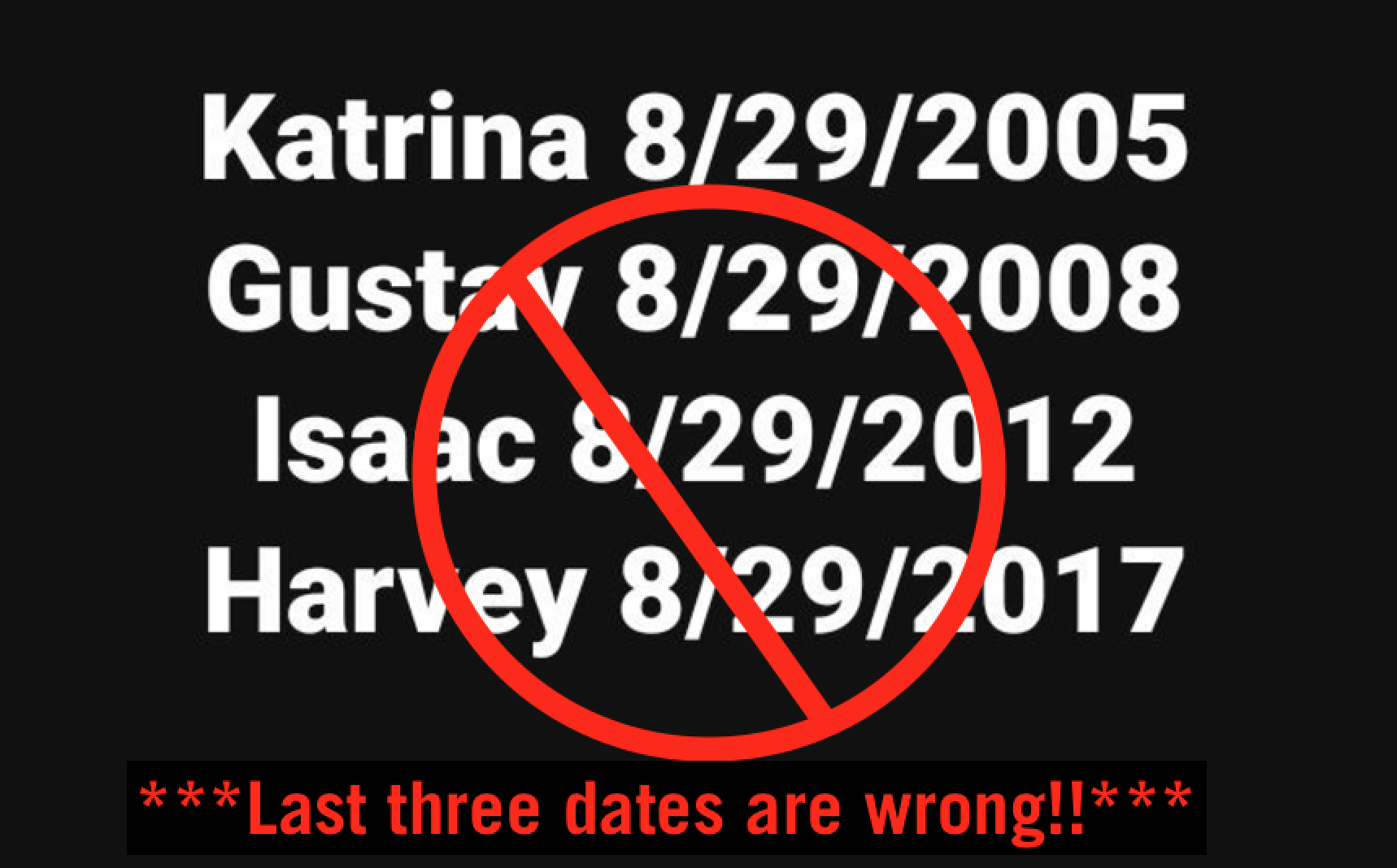 Hurricane Gustav made landfall on September 1, 2008 at approximately 10 a.m. CDT near Cocodrie, Louisiana (roughly 70 miles southwest of New Orleans). Gustav was a Category 2 hurricane with 110 mph sustained winds when it made landfall. Click here to read the official landfall information for Hurricane Gustav from the National Hurricane Center.

Hurricane Isaac made landfall on August 28, 2012 at approximately 7 p.m. CDT near the southwest mouth of the Mississippi River in extreme southeastern Louisiana (roughly 90 miles southwest of New Orleans). Isaac was a Category 1 hurricane with maximum sustained winds of 80 mph when it made landfall. Click here to read the official landfall information for Hurricane Isaac from the National Hurricane Center.

Hurricane Harvey made its first landfall on August 25, 2017 at approximately 10 p.m. CDT between Port Aransas and Port O’ Conner, Texas. Harvey was a major Category 4 hurricane with maximum sustained winds of 130 mph when it made landfall. Click here to read the official landfall information from the National Hurricane Center.

Harvey quickly crossed over a barrier island and made its second landfall August 26, 2017 at approximately 1 a.m. about five miles north of Rockport, Texas. Although a tad weaker, Harvey was still a major Category 3 hurricane during that landfall with maximum sustained winds of 125 mph. Click here to read the official landfall information from the National Hurricane Center.

Once Harvey made landfall in Texas, it gradually weakened to a tropical storm and drifted back into the Gulf of Mexico. Tropical Storm Harvey made its third landfall on August 30, 2017 at 4 a.m. CDT about five miles west of Cameron, Louisiana (or 30 miles east-southeast of Port Arthur, Texas). Its maximum sustained wind speeds at this time were 45 mph. Click here to read the official landfall information from the National Hurricane Center.

While the dates are incorrect in the social media post, the actual dates do line up within the final weeks of August/first weeks of September. This is known as the peak of the Atlantic Hurricane Season, when tropical storms and hurricanes form not only in the open waters of the Atlantic, but also in the Caribbean and the Gulf of Mexico as well.

Remember that hurricane season spans from June 1 through November 30; destructive tropical storms and hurricanes can develop anytime during this period, though they tend to “peak” between August 20th through September 30th.

What is a “landfall” anyway?

In meteorology, there is a distinct definition for the term “landfall”. It does not mean that the rain bands are on land. Instead, it means that the due center of circulation (often the due center of the “eye”) has crossed over land. That is why a storm will not make “landfall” until hours after the initial impacts (ie, high winds, heavy rain, storm surge) have been experienced on land.