A large complex of severe storms moved across Mississippi,  North Alabama and Tennessee Monday night into Tuesday morning producing numerous tornadoes in and near the WHNT News 19 viewing area.

The storm rolled through quickly, and it wasn’t until a couple of hours later that reports of damage began to come in. Most reports of wind damage came from the Cloverdale Community, north of Florence.

Franklin County, Tennessee: The storm surveyed in Franklin County caused significant damage to the Estill Springs community around 1:30AM Tuesday. Reports of trees down and housing damage came in quickly behind this storm.

The storm near Estill Springs showed one of the strongest shear rates we saw Monday night. Shear rate is a measure of the change in wind direction and speed as you move from the ground up to a storm, essentially showing us the potential for rotation.

Preliminary reports for this storm from the National Weather Service confirm an EF-2 tornado, which produced winds up to 130 mph. Read the survey here: NWS Huntsville Public Information Statement

Jackson County: The storm surveyed in Jackson County began showing signs of rotation back in southern Madison County around 2AM, but the rotation became much clearer as it crossed over into Jackson County around 2:30AM. Damage to outbuildings and barns were reported southwest of Scottsboro from this storm, which tracked just north of HWY 72 from Aspel toward Scottsboro.  Wind speeds topped out around 105 miles per hour over a path just less than four miles long.

Meteorologist Christina Edwards was in Aspel the morning after the tornado, and she gathered numerous imagery of the storm damage via her twitter feed.

6:11am Tuesday: County Road 101 in #Aspel, #AL. Looks to be metal debris wrapped around what’s left of this tree. #valleywx #alwx @whnt pic.twitter.com/0BlXsLBxpt

#Aspel #AL father was watching the weather when he got the #tornado warning. He gathered his family into their safe place moments before the storm debris crashed into the sunroom. #valleywx #alwx pic.twitter.com/gwZG2yD1Lm 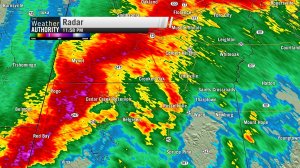 Franklin/Colbert: The National Weather Service in Huntsville completed the survey with Colbert and Franklin County EMA and determined that an EF-0 with roughly 76 MPH winds briefly touched down near Ligon Springs.