Keep an eye to the sky Thursday night — you may spot a shooting star!

Known as the ‘Unicorn meteor shower’,  these celestial spectacles are associated with the alpha Monocertoid meteor shower on during the late night hours of November 21 through early morning November 22.

Viewers in the Tennessee Valley can best see the meteor storm on Thursday night, November 21st around 10:15 p.m. CST — that is, if cloud cover is not blocking the view. 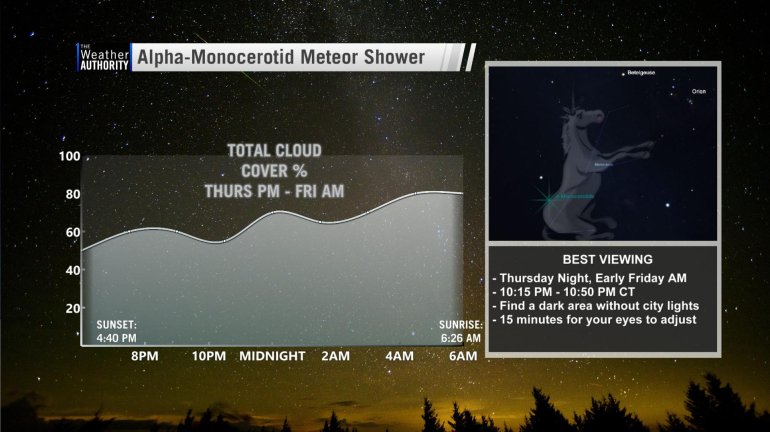 According to two meteor scientists, Esko Lyytinen and Peter Jenniskens, “Observers are encouraged to watch for possible alpha Monocerotids in the last hours of the night, from 4h15m UT (10:15pm CT November 21) onwards. If an outburst takes place it is likely to be centered around 4h50m UT (10:50pm CT November 21) with a duration of 15 up to 40 minutes maximum.”

Lyytinen and Jenniskens also noted that this is the same meteor shower previously produced outbursts in 1925, 1935, 1985 and 1995, “of which 1995 was already predicted and the photographic observations revealed the exact radiant”.

However, don’t expect a continuous burst of shooting stars.

NASA scientist Tony Rice notes that “during 1985’s meteor shower, the ‘400 meteor per hour outburst’ actually produced a 34 meteors over 16 minutes, in total.”

The brightness of the moon isn’t expected to interfere since it will be waning.

The best views will be in South America, eastern North America, western Europe and northwestern Africa. The radiant point of the meteors is in the Monoceros, the Unicorn constellation, near Orion the Hunter. 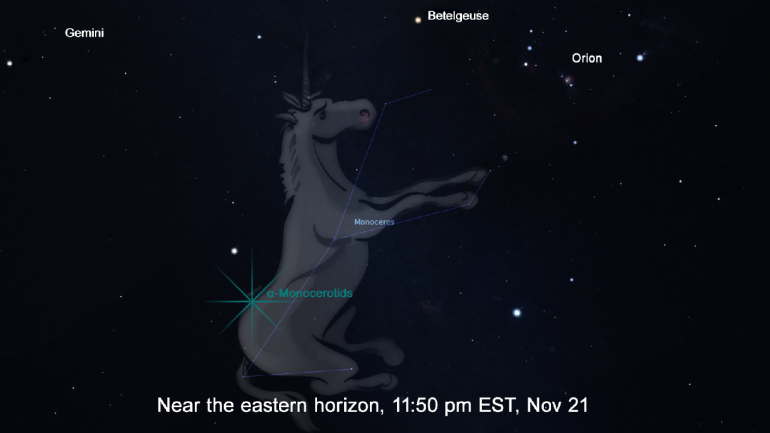 So why is this such a big deal? The alpha Monocertoid meteor shower usually happens each year around November 21 to 23, but during a normal shower it only produces a few meteors each night.

The large outbursts of this shower previously occurred in 1925, 1935, 1985 and 1995, with the outburst being a complete surprise for each of those years, except when it was predicted in 1995, according to the American Meteor Society.

The meteor shower comes from the dust trail of an unknown comet, the meteor scientists said. And the stream of meteoroids only intersects Earth’s orbit sometimes, which is what makes this potential outburst so rare.

The conditions are lining up the way they did in 1995, so the meteor scientists are hopeful, but remind everyone that this is only a prediction.

During the 1995 outburst, the hourly rate of meteors was around 400. If the prediction is correct and that happens again, skygazers can expect to see around seven meteors streaking across the sky per minute. But the rate could actually mean two to three meteors close together and then another minute before activity picks up again. They’ll be moving at about 140,927 miles per hour.

The scientists suggested that people prepare to observe the sky an hour before the predicted time in case the shower begins earlier.

Find an open area away from the city that will afford you a wide view of the sky, and don’t forget to bring a blanket or chair and dress for the weather. Allow yourself time for your eyes to adjust to the dark. And you won’t need binoculars or telescopes to enjoy the show.