The heaviest rain ended early Friday, but occasional, patchy showers continue through the evening and tonight. A cold front passes through Tennessee and Alabama overnight: slowly dropping temperatures from the mid-50s toward the mid-40s by sunrise Saturday.

It will not warm up much Saturday (if any at all)! Expect a chilly, damp morning with some light rain; drier air finally takes over in the afternoon. By the way, Saturday afternoon’s ‘feels like’ temperature (temperature, wind and lack of sunshine) will be in the 30s most of the day.  There might also be a few snowflakes on the Cumberland Plateau Saturday!

Sunday into Monday: Rain stays away on Sunday! The sky stays fair from start to finish; that means a cold, clear, and frosty morning followed by a cool but sunny afternoon: highs around 50°F to 55°F.

Some high, thin cirrus clouds drift in late Sunday evening; that’s a sign of some change: a fairly weak storm system bringing a chance of some showers late Monday.

Ahead of those showers, Monday afternoon looks decent! After starting in the 30s Monday morning, temperatures rise into the upper 50s by 2 PM with a partly cloudy sky and a southwest breeze up to 20 miles per hour.

More rain on the way: There are two obvious chances of rain in the next seven days: Monday night into Tuesday and then Friday through Saturday.

The first wave (early week) looks light. We typically base our rain chance on the odds of getting at least 1/10″ of rainfall; that is up in the 70-80% range, but the impact of the rain won’t be quite as significant as you might think a 70-80% chance ought to bring.

For that reason, we’ve placed the chance of rain at 50%: confidence is high, impact is not very high with a grand total of around 0.05″ to 0.25″ of expected rainfall.

The other good chance of rain arrives on Friday (if current timing holds true). That one could be another round of heavy rain: 1-2″ of rain expected, severe weather risk possible but not ‘likely’ right now.

Starting 2020 in 2019 style? January 2019 had 10 ‘rainy’ days for a grand total of 7.15″ of rainfall all month at Huntsville International. Through three days, Huntsville already has 3.57 inches, and more rain is coming.

In the next seven days, we expect at least another 0.8″ to 1.5″ of rainfall in North Alabama and Southern Tennessee; beyond that, our longer-range model guidance looks suspiciously like last winter. It produces somewhere around six to twelve inches of rainfall through January 20th (not including what fell before Friday).

There are some occasional peeks way out into the future that confirm ideas like this; one such is this one (sticking with European guidance, this is the ‘weekly’ long range) that shows over 10″ of rain through the end of the month.  That would include the 3-4″ already in the bucket this week. 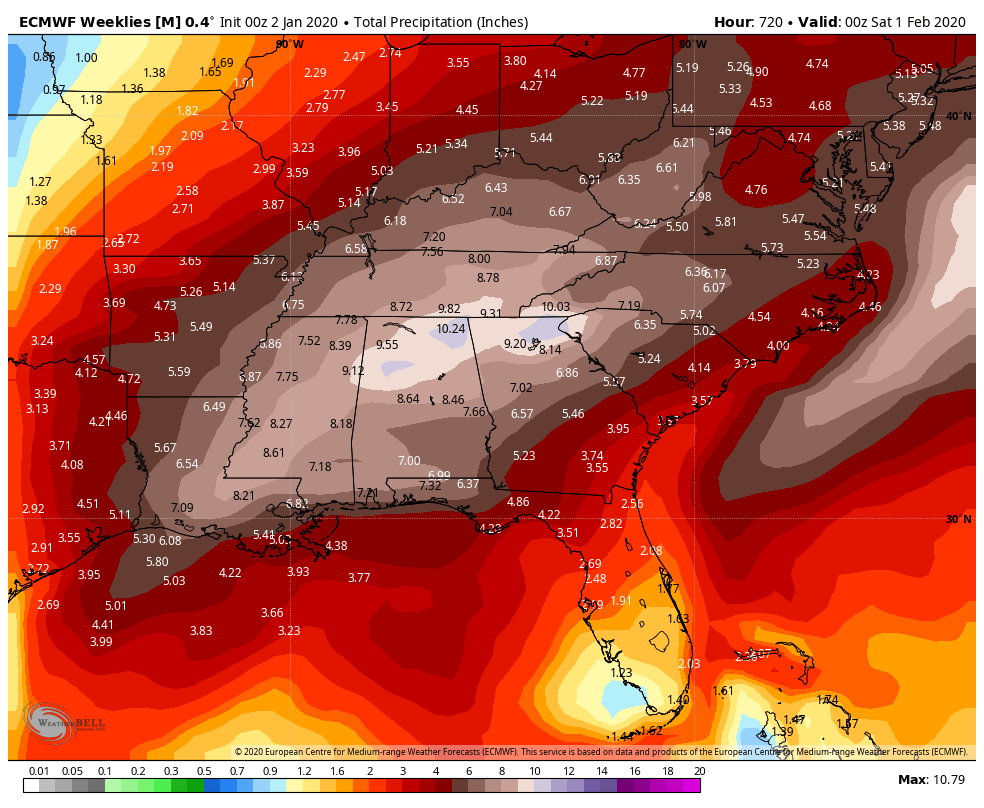 We’ll be keeping a close eye on the active pattern, and obviously if there are threats of flooding and severe weather, we’ll let you know as far in advance as possible!