Friday marked the 59th day of 90-degree heat in Huntsville this year, and the weekend is looking HOT!  Expect highs in the middle and upper 90s, and there might even be a spot or two touching 100ºF briefly either day because of the dry ground and relatively dry air.

Forecast modeling can show us some wild things this time of year.  Friday was national ‘tell a joke’ day, and this looks pretty funny from the GFS on Friday morning.  I tweeted this around 11 AM Friday…

And Friday night, a model run twelve hours after the Tweeted run showed more of what you would expect for September First:

Something like that cool down is possible this time of year, but it’s not looking exactly ‘likely.’  The pattern looks at least as hot as ‘normal’ around here through the end of the month.  The question is, will there be any rain to go with it?

Guidance from the Climate Prediction Center gives us a chance.  That’s it, though, a chance.  No guarantees.

This is a little more in the realm of a real forecast: 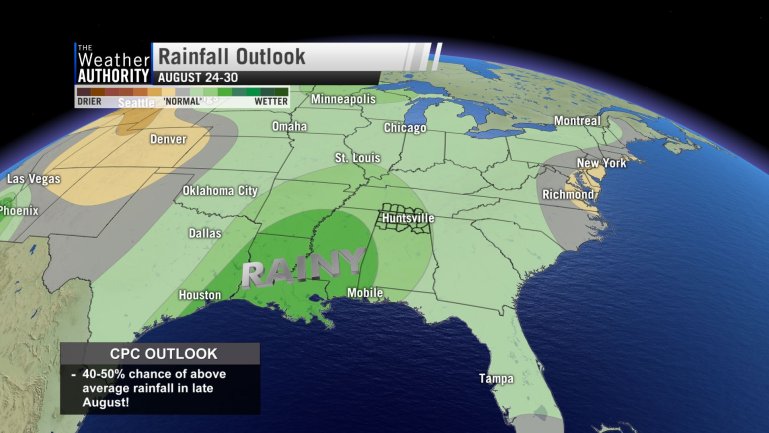 The rainfall outlook is positive through the end of the month, but it’s not a ‘lock.’  The odds of better-than-average rainfall in North Alabama are only around 40-50%.  Some rain would be welcome as it would knock the heat back and bring an end to the drought; it’s not a guarantee, though!

So is there a real end in sight? The short answer is simply ‘no.’ We typically have 90s through mid-September on a regular basis; the average final 90ºF day of the year is usually around the autumnal equinox, but it’s not getting ‘cool’ anytime soon.