On March 27, 1994, a historical tornado outbreak took place throughout the Southeast, including the state of Alabama.

On Palm Sunday 1994, as many as 6 tornadoes touched down in the Yellowhammer state, with four of them greatly affecting northern Alabama. 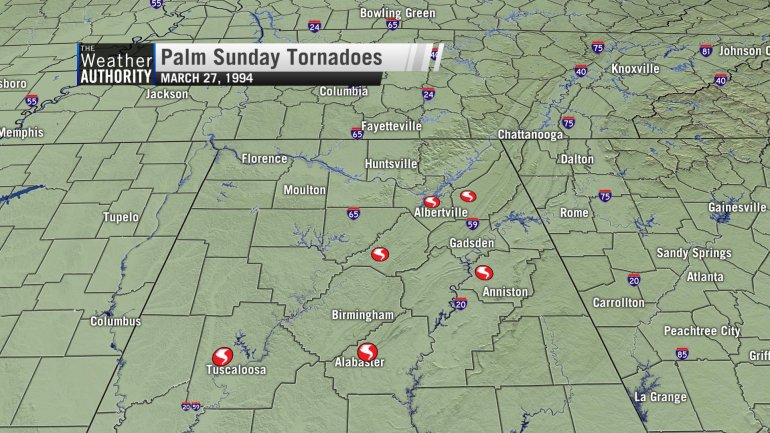 According to the National Weather Service: “Around 4:02 p.m. CST a tornado struck in an unpopulated area of Tuscaloosa County about 15 miles northeast of the center of Tuscaloosa. A 115 kilovolt power transmission line operated by Alabama Power Company was broken when two power structures were downed; a third was leaning.”

The tornado was later rated as an F0 with wind estimated speeds less than 73 mph.

According to the National Weather Service: “A tornado began on the north side of Helena on the Bearden Farm moving northeastward crossing Alabama 261 near Pelham High School. The school suffered some damage. Continuing northeast, the tornado caused damage in a residential section before doing extensive damage to two mobile home parks on the west side of U. S. Highway 31 on the north side of Pelham. The tornado did extensive to businesses in the stretch from the U. S. 31/Alabama 119 intersection to the Alabama 119/Interstate 65 intersection. The tornado continued on its track going through primarily residential areas of Pelham and Indian Springs. The tornado dissipated just before reaching the Meadow Brook area about two miles west of U. S. Highway 280. Areas in the path of the tornado included sections of Chandalar, Green Park South mobile home park, South Gate Mobile Home Park, Indian Springs Village, Broken Bow, Broken Bow South, and Riverchase.”

The tornado was later rated as an F2 with estimated wind speeds of 113-157 mph. 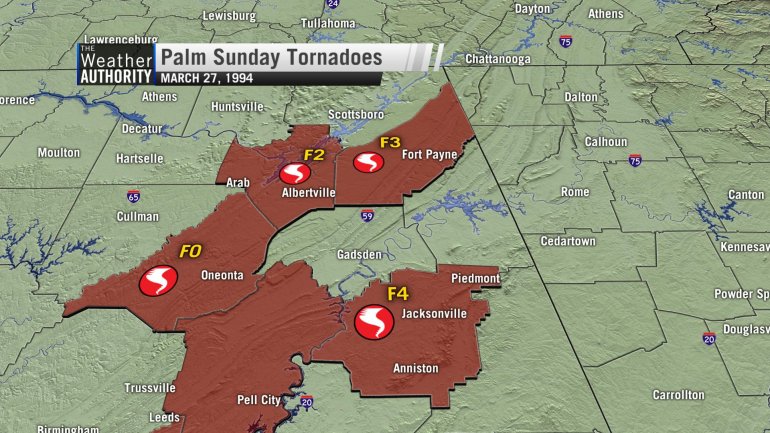 According to the National Weather Service: “A tornado travelled southwest to northeast across an area just south of the city of Guntersville. The tornado apparently began along Highway 79 South then cross Big Spring Creek damaging a number of residential structures along Spring Creek Drive. The tornado appeared to weaken but was still strong enough to rip off the top part of the roof to the Marshall Nursing Home and damaging several houses near the entrance to Happy Home. It crossed U. S. Highway 431 near the high school taking out some trees on the side of the mountain and damaging a couple of homes. A total of 103 houses were damaged, 45 of them along Spring Creek Drive and 8 along Highway 79 South. In addition, hail of 0.75 near Arab at 10:55 am CST, and 1.75 inches in diameter reported at Guntersville at 11:15 am CST.”

The tornado was later rated as an F2 with estimated wind speeds of 113-157 mph.

According to the National Weather Service: “A tornado struck near the Grove Oak area in the western sections of Dekalb County moving northeast through the towns of Rainsville, Sylvania, and Henager. In the path of the tornado, Emergency Management personnel reported 16 homes and 13 mobile homes completely destroyed, 45 homes and 2 mobile homes with major damage, and 21 homes and 9 mobile home with minor damage. Two businesses and 12 poultry houses were destroyed. In addition, 0.75 inch hail reported at Sylvania at 11:48 am CST, at Henager at 11:57 am CST.”

“At 11:50 am CST golf ball size hail was reported in southern Cherokee County, 10 miles southeast of Centre, with the thunderstorm that produced the tornado,” the National Weather Service reports. The NWS also rated the DeKalb County tornado an F3 with estimated wind speeds of 158-206 mph.

According to the National Weather Service: “At 11:57 am CST, a tornado was reported in the Sugar Creek Community about 3 miles southwest of Nectar along Alabama 160. The storm damaged six homes, downed power lines and trees, and destroyed three greenhouses and damaged a fourth.” The tornado was later rated as an F0 tornado with estimated wind speeds less than 73 mph.

According to the National Weather Service:

“A tornado began about 1 mile south-southwest of Ragland in St. Clair County at to 5 miles northeast of Rock Run 10:55 am CST. It traveled northeast at between 45 and 55 miles an hour crossing the Alabama/ Georgia border about 5 miles northeast of Rock Run in Cherokee County. The tornado moved across County Highway 144 just south-southwest of Ragland where it first began then destroyed a number of structures along 144 to the east of Ragland. The tornado crossed primarily wooded land before moving through a camping area on the west side of Neely Henry Lake. A woman was killed outside on the west side of the lake as she tried to secure a boat. The tornado crossed Neely Henry Lake just north of the dam as it moved into Calhoun County. Twenty-six homes were damaged, 18 homes were destroyed, and 20 mobile homes were destroyed in St. Clair County.”

“Moving into Calhoun County at 11:04 am CST, the storm continued on a steady northeast track (60 degree heading) crossing the north side of Ohatchee. The storm crossed US Highway 431 at 11:20 am where one man was killed when the van he was in was thrown into a ditch. Three other people in the van were injured. The storm continued northeast across mostly woodlands with only scattered structures, mostly homes, in its path. It crossed US Highway 278 between four and five miles west-northwest of Piedmont.”

The storm entered Cherokee County at 11:35 am CST. At 11:39 am CST the tornado destroyed the Goshen United Methodist Church located 1 mile north of the Cherokee/Calhoun County line on County Highway 9 killing 20 people and injuring 92. The tornado continued northeast across Cherokee County reaching the Alabama/ Georgia state line at approximately 11:52 am CST.”

The National Weather Service later rated the tornado as an F4 with estimated wind speeds of 207-260 mph.

This is the 25th anniversary of the EF-4 tornado that killed 20 people in the Goshen United Methodist Church during the Palm Sunday worship service on March 27, 1994. A total of 92 were injured. They never heard the warning, issued 12 minutes before the building was destroyed pic.twitter.com/1cpld7U5s8

Below is archived video of WHNT News 19’s courtesy of Mike Wilhelm at BamaWx.com