According to the National Weather Service, a total of 62 tornadoes touched down in the state of Alabama alone on April 27, 2011, with nearly two thirds of them occurring within north Alabama.

Marshall County alone was impacted by over a dozen tornadoes — 15 to be exact. Limestone and Madison counties were hit by a combined 13 tornadoes. Seven tornadoes hit DeKalb County, including a long-track EF-5 that directly hit the city of Rainsville, packing wind gusts higher than 200 miles per hour. 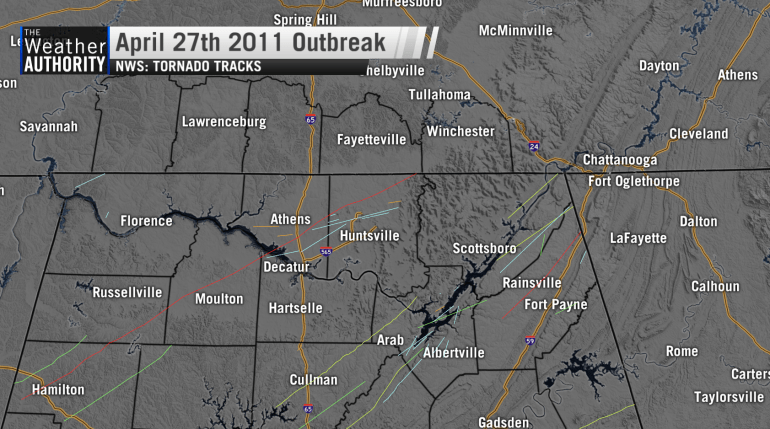 The tornado outbreak began early that morning as a squall line produced numerous strong tornadoes in the state. A few more rounds moved through in the afternoon and evening, through early the following morning, prompting as many as 92 different tornado warnings in north Alabama alone.

Across the state, as many as 252 people died as a direct result of the tornadoes. In north Alabama, 100 people perished. 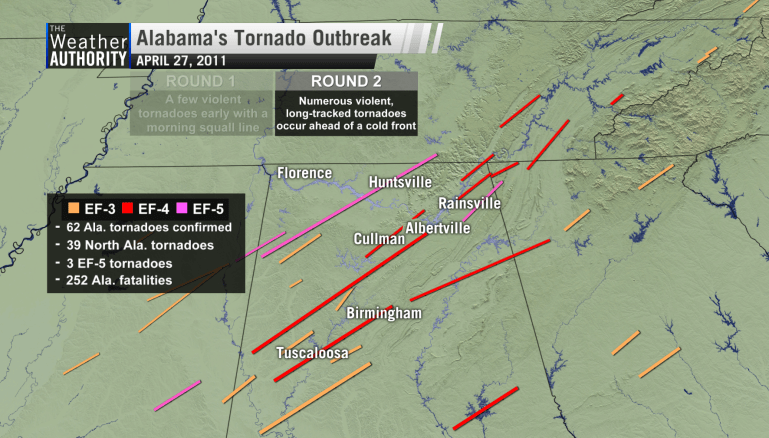 A tornado outbreak of this magnitude is relatively rare, but it is important to know that April is the peak of the spring tornado season in Alabama. Records show that nearly 200 tornadoes have touched down here in the Valley in the month of April alone, and the threat doesn’t go away in the summer, fall and winter seasons.

It is easy to be emotionally paralyzed by fear because of what happened seven years ago, which is why a little bit of action now may help you in the future — this information will be useful the next time severe weather is in the forecast.

Our goal here at WHNT News 19 is to help prepare you and not to scare you. However, when weather does become a serious threat, it is our mission to responsibly relay to you the threat associated with the weather so that you can plan accordingly. But you and your family will need a plan, and the best time to develop that plan is while the weather is quiet.

As we look back at April 27, 2011, it’s important to acknowledge the feelings and emotions associated from the tragic tornado outbreak, but it is equally important to not let the fear and anxiety prevent us from being ready for the “next one.” Take a few moments to arm yourself and your family with the information you need to be safe during severe weather.

BIRMINGHAM, Ala. (WIAT) -- The State of Alabama believes it will finalize its protocol for executing death row inmates by nitrogen suffocation "within months."

In a federal court hearing held Friday afternoon, Richard Anderson, a lawyer representing the state attorney general's office, said that while the state could not provide a "date certain," officials believe an execution protocol using nitrogen suffocation will be completed "within months."

WASHINGTON, (NEXSTAR) — Right now, Democrats and Republicans are ramping up efforts to regulate tech giants they say are operating like monopolies but the push faces an uphill battle.

Sen. Dick Durbin, D-Ill., says big tech is an issue that will affect every American. He says the Senate is advancing legislation to prevent big tech companies like Google, Amazon or Apple from promoting their content over smaller competitors.

ATHENS, Ala. - The U.S 72 and Clinton intersection in Athens has been awarded funds as part of the Rebuild Alabama Act.

The project will add turn lanes on Clinton Street, an extended turn lane onto Clinton Street for vehicles traveling west on U.S 72 and moving the traffic light further west from Catfish Cabin's entrance.

Think your home value is soaring? Talk to a farmer

What did Alabama not like on TV in 2021? The FCC has the answer