By definition, any rainstorm is considered a thunderstorm if thunder can be heard. And if thunder is rolling, then that means lightning is present -- and it could strike you if you are not careful.

Lightning 101: How it forms

Lightning is a spark of electrical current flowing from the cloud to the ground, or even from one cloud to another. The atmospheric form of lightning is a giant version of the static electricity "shock" you experience when you rub your feet on the carpet and then touch the door knob.

Lightning is HOT, that's why it causes thunder

A bolt of lightning is so incredibly hot, it can heat the air around it to 18,000 degrees Fahrenheit!

This rapid heating -- followed by quick cooling -- of the air causes it rapidly expand and contract, which then creates a shockwave. That wave continues to travel through the air as a sound wave until it reaches your eardrums, which is what you hear as thunder. In order for thunder to occur, lightning must be present! If you can hear thunder, that is your cue that lightning is close enough to strike you.

If you hear thunder -- or see the flash of a lightning bolt -- immediately head indoors and remain inside until 30 minutes after the last flash or boom.

Lightning can strike as far as 10 miles from its cloud, known as a "bolt from the blue"

One of the most dangerous types of lightning to occur is the "bolt from the blue".

Often, in the spring and summertime, a thunderstorm can develop as far as 10 miles away from a given point.

Anyone enjoying outdoor activities at that point may only see sunshine, and they may not necessarily notice the towering thunderstorm developing a few miles down the road, mainly due to elevation changes or even obscurity due to trees and buildings, etc.

However, as the electrical charges build inside the thunderstorm, enough positive charges may build within the top of the cloud to solicit electrons from the ground as far as 10 miles away. As a result, lightning can strike, even though the thundercloud was hidden -- the result is a "bolt from the clear blue sky".

This is why you should always head indoors if you can hear thunder, even if all you see is sunshine. Thunderstorms can move very quickly, so lightning may be approaching before you even know it. Research shows that "bolts from the blue" can travel more than 25 miles away from the "parent" thundercloud.

Lightning safety: What you need to know so that you don't get struck

Since 2006, as many as 20 to 50 people are struck and killed by lightning strikes. With that said, only 10 percent of people struck by lighting are killed; the remaining 90 percent are left with varying degrees of injury, according to the Lightning Injury Research Program.

Lightning strike survivors often experience short-term injuries like superficial burns where the electricity enters and leaves the body; intense headaches; ringing in the ears; concussions; dizziness; nausea or vomiting; as well as potentially life-long injuries to the brain/nervous system.

There are five ways that lightning can strike a person:

So how can you avoid putting yourself in danger of being struck by lightning?

Our Live Alert 19 app will notify you if lightning has been detected in the area. It is free for both Apple and Android devices, and you can program it for different locations, including if you are at the beach or relaxing on the lake. 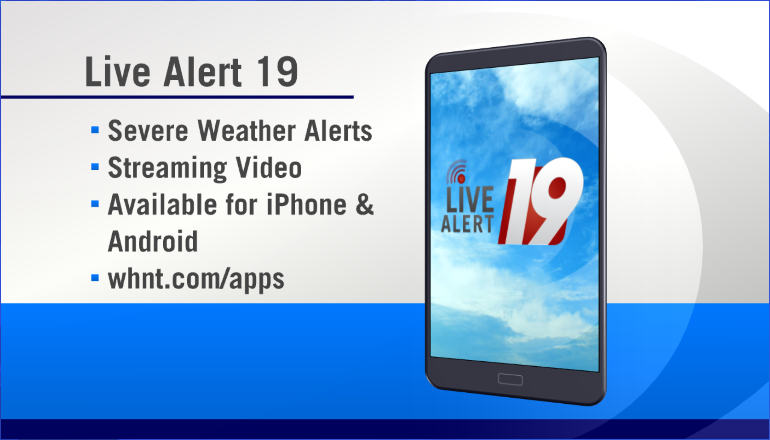 One of the best looking comets in years has been visible from the Tennessee Valley recently, and will be for a couple more days.

Comet C/2020 F3 (NEOWISE) will only be visible from North Alabama for a couple more days, so if you want to get a glimpse, your time is running out. Here's how to see it.

July Heat Not Far Off

We've had a bit of a reprieve from the heat so far in July. It's been hot, sure; but not as hot as we'd expect. That changes as we head into next week.

High pressure builds over the Central and Eastern parts of the U.S. next week, leading to more hot and humid weather, and some of the hottest weather so far in July for those of us in North Alabama.

‘Fay’ could develop by the weekend near the U.S. East Coast

Should the storm develop and become 'Fay,' it would be the earliest date in the season that we have had six storms. The earliest on record to date was Tropical Storm Franklin on July 22, 2005; that happened to be one of the most active, disastrous hurricane seasons on record as well.

A Tropical Storm Fay would not likely be a major disrupter for the East Coast; the worst part of the storm would remain offshore, but some wind and rain are likely from the Carolinas to New England through the weekend.