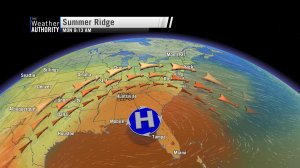 The same weather pattern that brought summer heat last week is still hanging on this week. A large ‘ridge’ of high pressure stays centered over the Southeast, keeping our weather similar to the past several days: hot and humid.

We’ll maintain a low 10% chance of an isolated downpour developing this afternoon between 12PM and 6PM; No widespread rain will come down as long as high pressure is in control of our weather, but we’re just humid enough that shower could bubble up during daytime heating.

Summer Heat: Patterns like this one can last for weeks, which is why we haven’t seen any notable change in our weather day-to-day for the last week. We will at least see a slight shift in the current pattern by the end of the week though. 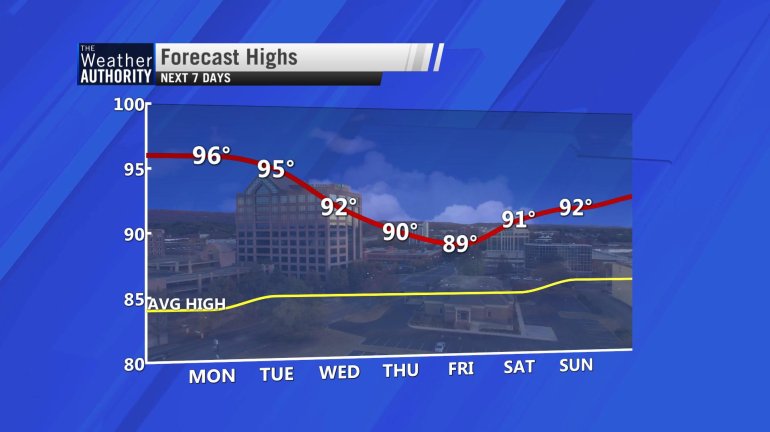 As high pressure drifts farther south, we’ll no longer be directly under it by Midweek. Once we’re no longer directly under the ridge, the heat will ease up some. High temperatures will be suppressed back into the upper 80s and lower 90s. It’s not  big change, but it will get us a little closer to seasonal averages which are in the mid 80s!

A Little More Rain: When strong ridges like the one currently over the Southeast set-up, rain and storms remain on the edge of the ridge. That has kept us mainly dry, while bringing days of heavy rain and storms to the Plains and Midwest. As the weather pattern shifts later this week, the Tennessee Valley will be closer to the edge of the ridge where rain is able to develop.

We won’t be directly in line for the storm systems that move along the edge of the ridge, but we’ll be close enough for some here-and-there storms each day starting Thursday and lasting through the upcoming weekend. Rain totals will be uneven, so a few of us will get some heavy downpours while others get little-to-nothing by the weekend.

Hottest weather of the season begins this week

Monday morning will start off mostly clear, however patchy dense fog is possible, especially in areas that received heavy rainfall on Sunday. Morning lows will drop near the dewpoint, ensuring the cool and moist start to the day.

Afternoon highs will rebound into the upper 80s and low 90s for Monday afternoon under a mostly clear sky. Dewpoints will still be in the upper 60s — while not necessarily in the “dry” category, these dewpoints will be low enough to keep heat index values from climbing into the “uncomfortable” territory.