Earlier this week, the Climate Prediction Center — a division within the National Oceanic and Atmospheric Administration, or NOAA — indicated that the winter of 2017-2018 may exhibit La Nina conditions in the Northern Hemisphere.

So what does that mean for the Tennessee Valley? And what is La Nina in the first place?

Two phases of an ocean-atmosphere system

La Nina is part of an overall ocean-atmospheric pattern called the EL Nino Southern Oscillation, or ENSO. ENSO conditions are observed in the Pacific Ocean, just south of the Equator and spanning from the South American coast westward toward Indonesia. Specifically, this area is known as the “Nino-3.4” region and is defined as the area between 5oN-5oS and 120oW-170oW.

El Nino is considered to be the “warm phase” of ENSO, when warm ocean waters collect along the equator near the coast of South America.

La Nina is considered to be the “cool phase” of ENSO, when winds push the warm ocean waters further west, allowing much cooler waters to upwell near the coast of South America. 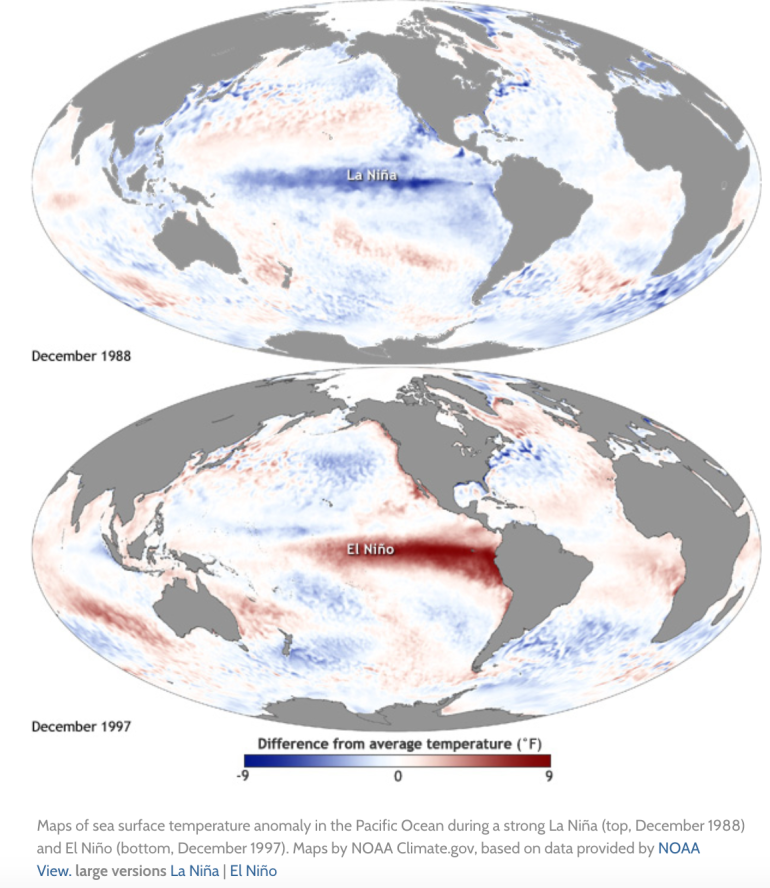 Both phases irregularly shift back and forth over the course of a season or two, at times even spanning through the majority of a year.

Because ocean water temperature cools/warms the air above it, the weather across the Pacific Ocean — as well as across North America — can be impacted by the ENSO Phase. This is why ENSO is known as a “teleconnection”: The air/water interaction “far away” (the “tele-” portion of the word) is “connected” to the weather where we live.

How does La Nina impact the Valley’s weather? 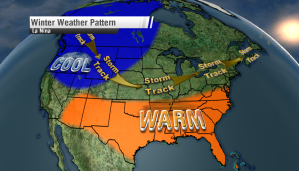 In general, the cooler ocean waters in the Pacific create an area of downward-moving air from Alaska south along the West Coast of North America. This sinking air produces an area of high pressure, which prevents rain from developing in this region.

As a result, the jet stream (which drives storm systems) are diverted around the high and through the Rocky Mountains. However, it remains limited to the Ohio River Valley and does not make it too far south. 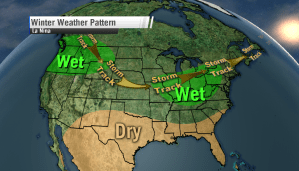 In a nutshell, La Nina conditions bring warm and dry weather to the Southeast, including the Tennessee Valley. This is a generalization, and is not the “end all, be all” for the season.

In fact, other teleconnections can usurp La Nina’s influence on our weather. An example of this is the winter of 2010-2011. Not only did it snow on Christmas 2010, but Huntsville experienced its third biggest snowstorm just two weeks later, on January 9, 2011. In the case of winter 2010-2011, the warm and dry conditions of La Nina were overridden by a strongly negative North Atlantic Oscillation.

The ENSO teleconnection impacts many weather patterns across the globe, including severe weather and hurricane formation.

NOAA’s climate.gov website outlines in detail how El Nino and La Nina form as well as their influence on the global weather pattern.