The temperature stayed below 32ºF from Sunday evening until about lunchtime Tuesday (roughly 38-42 hours for most of North Alabama and Southern Tennessee); the majority of that time spent in the twenties means some unique ice formations like this ‘ice spike’ from Steve McDaniel’s deck in Madison!

The ‘spike’ shape is the most common, but they have been known to form vase-like shapes, candle shapes, and inverted pyramid shapes.

Ice spikes often form in bird baths or dog bowls like those above because the shape of the basin favors their formation. The following partial explanation and diagram are taken from “Ice Spike Formation Induced by Dendritic Ice Sheets” by Miles Chen: 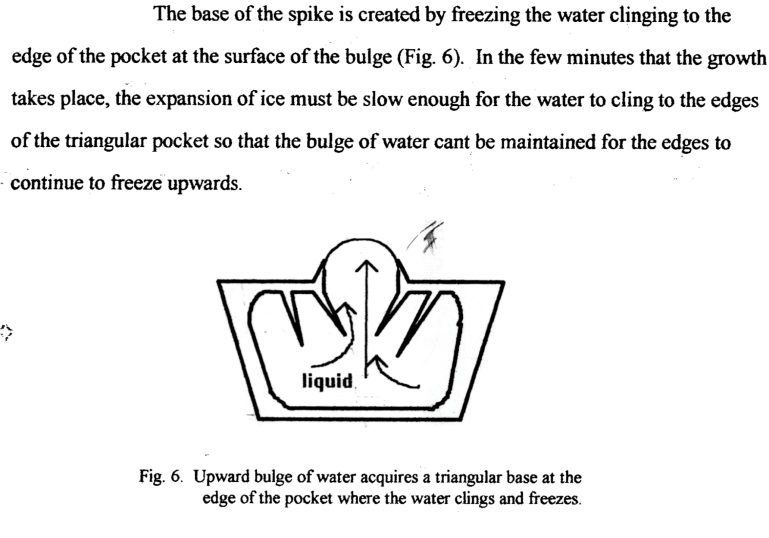 In other words, ice crystals don’t create a smooth, solid block; there are cracks and crevices that allow water from below to seep upward.  That makes it possible for more water to move upward and freeze as it rises above the rest of the ice.  These things are just as common with ice trays in freezers as they are in backyard birdbaths in cold weather!

…and this one at Depot Park in Cullman.  The sun worked on the southern side of it, but the northern side stayed solid ice all day long.

Tuesday afternoon, as temperatures rose from "You've got to be kidding!" to a balmy "Give me a break," sunshine coming from the south turned the Depot Park fountain from a wedding cake into a caped crusader. (W.C. Mann for The Cullman Tribune) @WVTM13 @HarmonyWVTM13 @simpsonwhnt pic.twitter.com/TcGyIqqOhP

Looking Ahead: rain and storms likely next week

So what do you get when you put two big weather nerds in a room full of Third Graders? A big, fun mess; that's what you get! Meteorologist Christina Edwards and I visited Columbia Elementary in Madison Thursday morning to talk weather, and we had a few things to prove!

Special thanks to Mrs. Dunkerley for inviting us to Columbia today! We coordinated with her last year when we began to think about revamping our science and weather presentations, so it was fun to show off the new digs with this crew!

Cold air coupled with moisture in the atmosphere is poised to move over north Alabama and Middle Tennessee overnight into early Friday morning. A few snow showers are possible in north Alabama, however little more than a dusting is expected in the higher elevations of Jackson and DeKalb counties due to limited moisture and frigid air available.

Exclusive poll shows Joe Biden with double-digit lead in S.C. ahead of primary