It’s been fairly quiet in the Tropical Atlantic lately; the National Hurricane Center has named four storms in the Atlantic so far in 2017: Arlene, Bret, Cindy and Don.

Cindy made landfall in Louisiana on June 22nd; that’s the only system to impact the United States to date this season.

So what now?  Has the season been a bust, right on target, or what? 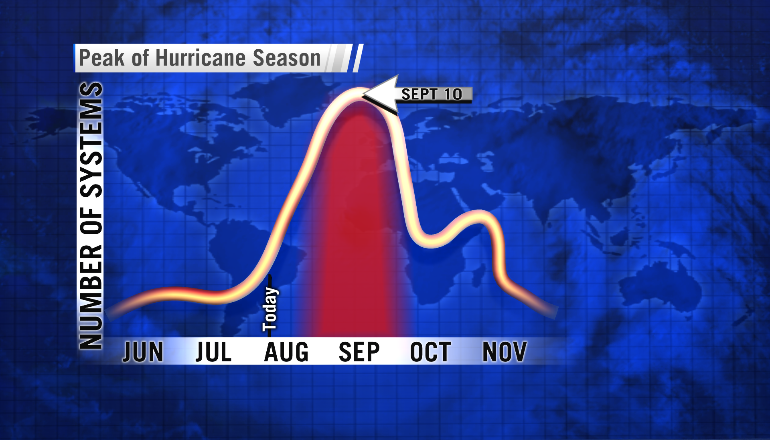 UCAR scientist Michael Lowry tweeted some interesting images on Tuesday that explain why 2017 seems like a low-key season so far.  The take-away?  The atmosphere has been in an unusual state over the tropics with more downward than upward motion (i.e., sinking air preventing storm development).  When he says “…bigger impact thanks to climatology.” he’s referring to that fact that the Atlantic’s storm development usually occurs later in the season anyway.  This downward motion has just added an extra element of tropical cyclone suppression.

Anomalous sinking also present in the Atlantic, but bigger impact thanks to climatology. Waters toasty, shear low in MDR, high in Caribbean. pic.twitter.com/IDc5tSIdIw

The season is really just getting started.  August, September, and October can be very active months (see 2004 for example).

This should get the hurricane hounds ( I am one) salivating for higher impact SST closest to 2004 of last 20 years pic.twitter.com/H15tG8g3kr

There’s a reasonable chance that there could be some development in the Gulf of Mexico in the next few weeks.  Climatology favors that, and so does the atmosphere.  Tuesday’s midday GEFS guidance tries to develop something substantial between August 3rd and 10th:

Whether this way-out-there idea of a storm comes to fruition or not, there’s a lot of hurricane season left to go. We’ll keep you posted if there’s anything to be concerned about; otherwise, enjoy the little break from the heat coming up this weekend!

Body found in water near port of Decatur