Skip to content
Breaking News
Breaking News
President Trump’s COVID-19 Task Force to hold Tuesday briefing
Watch Live
Watch Live
WHNT News 19 at 6:00
This is an archived article and the information in the article may be outdated. Please look at the time stamp on the story to see when it was last updated.

The fourth of July celebrations will be wrapping up soon, but that doesn’t mean there won’t be some great sights look up at in the nights to come this month! Saturn, Jupiter, Mercury, and Mars will all be visible in July if you know when and where to look.

The first event to look out for is Saturn’s Opposition, which will occur on July 9th. At opposition Earth will be between Saturn and the Sun, and this year the orbits will line up nicely to give us a bright view of Saturn.

On July 9th Saturn will rise as the sun is setting. You should look southeast, near the horizon, close to midnight for the best view. You can also see Saturn closer to the moon by July 15th. This could make it easier to find, since you’ll be able to see it just after nightfall near the rising moon.

At same time, but higher in the sky, you’ll be able to spot Jupiter. Jupiter will be visible above Saturn, in the south/southeastern sky, through the first half of the month. As the King Planet, Jupiter will also be brighter than Saturn. 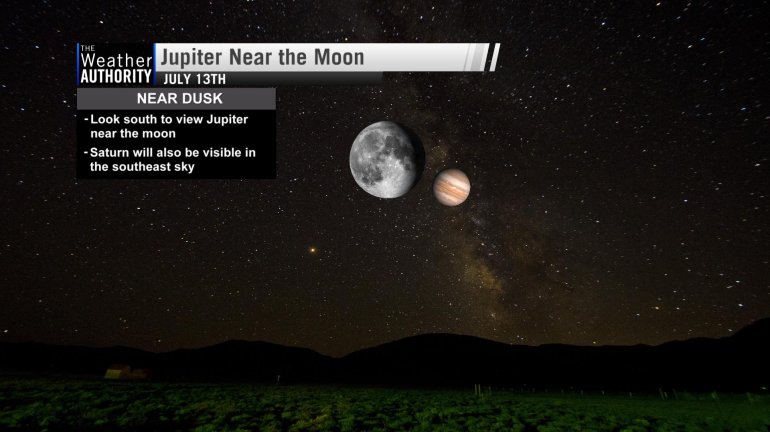 To easily spot Jupiter you can use the moon as a reference point near the middle of the month (from the 12th to the 14th). During this period Jupiter will be nearby the moon in the southern sky, near dusk.

Harder to spot, but still visible for the sharp-eyed, will be Mercury and Mars. Mercury and Mars will only be visible close to sunset and close to the horizon. The glow of the sunset could outshine them though, so for your best chance at a view you should bring binoculars.

To try to see Mercury and Mars, look to the west just after sunset through the first two weeks of July. By the middle of the month, they’ll be below the horizon and out of our view again.

Have a photo of one of these great sights? Share it with us using the button below!

March ends as the seventh-wettest on record in Huntsville with a whopping 10.67" of rainfall this month.

But what about the year so far?

Since January, Huntsville International shows at least a trace of rain on 61 of 91 days; it's rained for about two-thirds of the past three months!

Total rainfall adds up to 28.85 inches from January First to the end of March. Curious about the top 10 wettest 'first quarters' to a year?

A radar confirmed tornado touched down near the Troy Municipal Airport this morning, and it was detected by radar.  The tornado caused a Tornado Debris Signature (TDS) on radar. This signature is caused by debris being lifted into the air by a tornado. Debris can be detected now by Dual Polarization technology. In the bottom left panel of the radar image, we're using Correlation Coefficient, which is a way to…