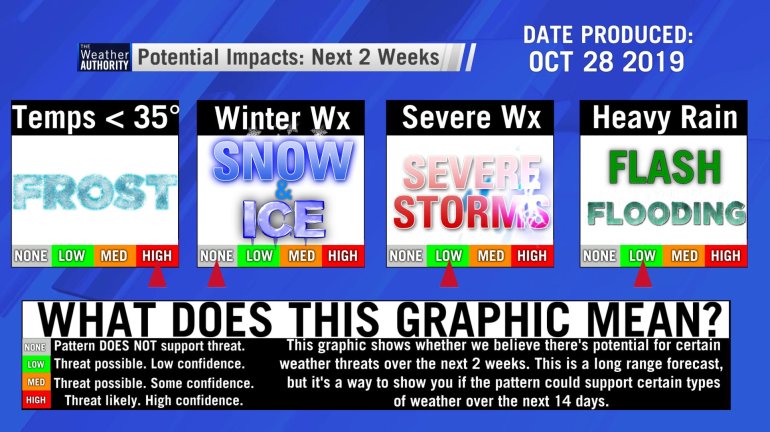 A mid week cold front will be the biggest weather feature we deal with for at least this week, and it will bring with it some good, soaking rain and the chance for some heavier thunderstorms. Behind that front comes the coldest air so far this Fall, and our first widespread frosts.

A cold front moves through our area through the middle of this week, triggering showers and storms, and occasionally some heavy rain.

Along with the rain, some forecast models show the potential for a few strong to severe storms. There’s still a pretty big spread in the models, with some showing a potent atmosphere that could support severe weather, and some models showing an atmosphere that might could support a couple of heavy storms, but probably wouldn’t support much severe weather. At this point, we think a few heavy storms are possible, but the overall severe weather threat isn’t too high. We’ll continue to fine tune things over the next couple of days. We do expect a decent amount of rain, (probably between 1-3 inches, but some spots will probably fall on either side of that range too) and that rain may be heavy enough to cause some flooding issues. At this point, we don’t have high enough confidence in where the heavies rain will fall that our flash flooding risk will remain in the low category for now. 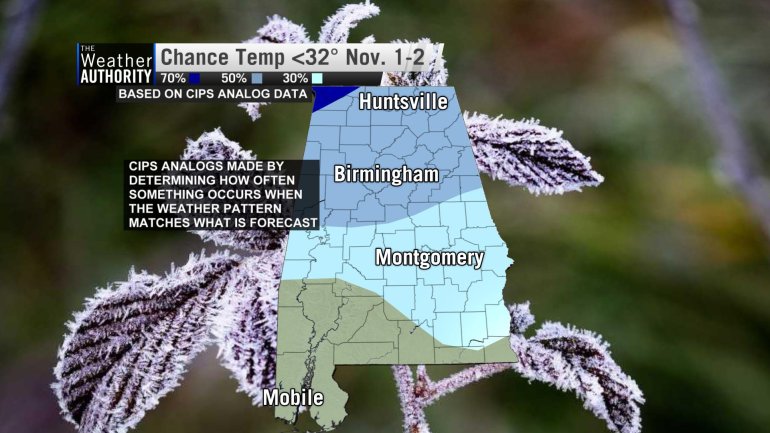 CIPS Analog Guidance, a tool that looks at what the weather pattern is forecast to look like, and then compares it to what the weather did when the pattern looked like that in the past, shows a pretty good chance that north and central Alabama could see the first morning lows below freezing of the fall season. We’ve got forecast lows very close to 32° Friday through Monday mornings. The analogs show we hit freezing around 50% of the time when the pattern looks like it will to start November. Our average first freeze is Nov. 2, so we’re right on schedule.

For more on the week ahead, check out the latest forecast discussion.