A *Heat Advisory* continues from noon to 7 PM on Wednesday – for the highlighted counties in North Alabama. The heat index in Muscle Shoals got to 108°F on Tuesday.  A heat advisory literally means ‘that a period of hot temperatures is expected. The combination of hot temperatures and high humidity will combine to create a situation in which heat illnesses are possible. Drink plenty of fluids, stay in an air conditioned room, stay out of the sun, and check up on relatives and check up on relatives and neighbors.’ 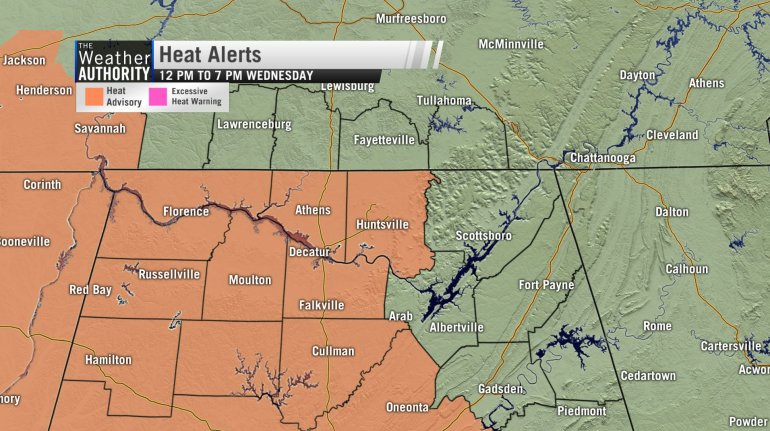 Hot, humid weather won’t be going away anytime soon; however, there is some hope of rain and thunderstorms reducing the heat by the end of the week!  Temperature soar to the middle and upper 90s again on Wednesday, and the heat index still could touch 105ºF or higher during the hottest part of the day.  A few isolated thunderstorms are possible Wednesday afternoon.  The odds of any one spot getting rain are around 20%, but as is often the case with summer storms, those few spots that do get rain could get a lot in a very short time!

There are two main weather features to watch through the end of the week: (1) a cold front moving in Thursday and (2) a disturbance over the northern Gulf of Mexico that could become a depression or tropical storm (Barry) by Thursday or Friday.  Both of these features have sway over the weather around here in coming days; there are plenty of ‘moving pieces’ to the forecast, so expect some adjustments as we see things unfolding through the weekend.

More about what could be ‘Barry’ soon: It’s not totally unheard of to see a storm develop this way; in fact, it’s rare to have a tropical system that didn’t start out as some kind of ‘feature’ from the mid-latitudes like a cold front, large cluster of thunderstorms (mesoscale convective system), or something of that family.

Current thinking is that it becomes a tropical storm and makes ‘landfall’ on Louisiana’s coast sometime Friday or Friday night.  While it won’t be a major storm like Michael, Harvey or any of those in recent memory, it will have a lot of wind and rain as well as a risk of a few severe storms for Louisiana, southern Mississippi and potentially southwest Alabama depending on just how far east it comes inland.

The farther east it tracks, the more likely it is to have an effect here in North Alabama and Tennessee.  What kind of effect?  It would mainly come from extra clouds and soupy tropical air enhancing daily thunderstorm activity around here on Saturday, Sunday, Monday and Tuesday. 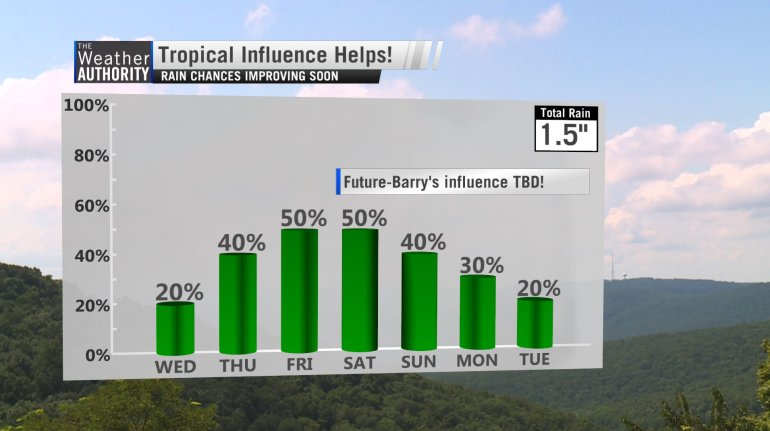 If the storm is a little farther west, then our ‘going’ forecast for highs in the upper 80s and lower 90s with a ‘good’ chance of some scattered storms will hold.  We will adjust if need be as it becomes clear just how large this system is and how far east it comes inland. 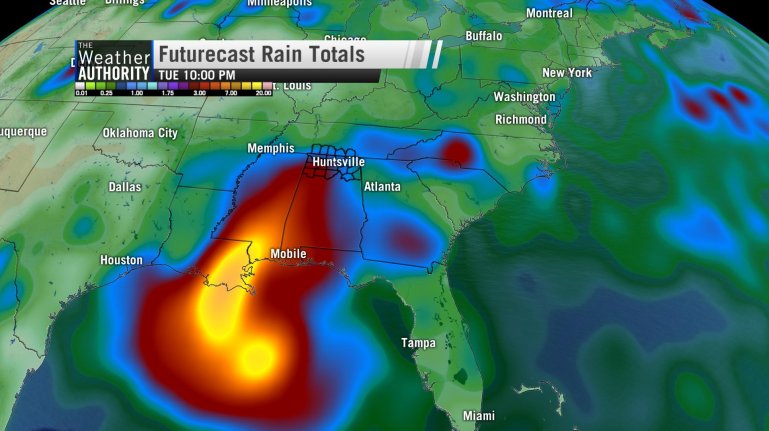 Unsettled pattern continues across Space Coast SpaceX is scheduled to launch its Crew Dragon spacecraft on Wednesday afternoon. The two man crew is headed to the International Space Station. It's been a soaker the last couple of days thanks to a tropical disturbance in the area. It's Florida's wet season, but the rain is aided even more with tropical moisture in the area. Green areas indicate high humidity and fuel…

Suspected killer, woman in custody in case of triple murder in Danville