We are over half way done with 2018, and it has already been a year of extremes! 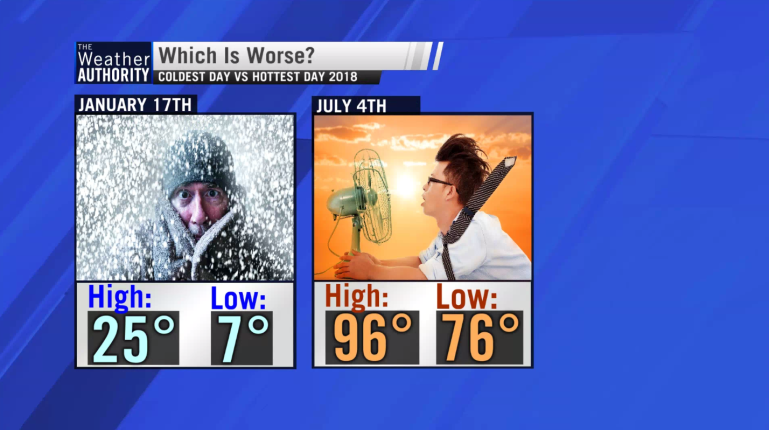 Coldest Day of the Year

Way back on January 17, Huntsville recorded the coldest day of the year when morning lows dropped to 7 degrees Fahrenheit. No, that wasn’t the wind chill — it actually cooled to 7 degrees that morning!  For perspective, the average low for January 17 is 32 degrees, though a record low of -4 degrees occurred on 1982.

By afternoon, temperatures slowly “warmed” to the daytime high of 25 degrees, which was close to the record coldest high (21 degrees) for this date set in 1977. The average high for January 17 is 51 degrees.

Hottest Day of the Year

Fast forward six months later, and the hottest day of the year (so far) took place on a firecracker of a day, the Fourth of July.

Morning low temperatures in Huntsville did not drop below 76 degrees, about 6 degrees warmer than normal.  Afternoon highs climbed to a sweltering 96 degrees, which was also 6 degrees above normal. The record high for the Fourth of July in Huntsville is 102 degrees (set in 2012), and the record morning low for the Fourth is 57 degrees (set in 1961).

Which do you think is worse:  Winter’s frozen chill or Summer’s sweltering heat?

Let us know by sharing a photo below!