Groundhog Day is here yet again! Early Saturday morning Punxsutawney Phil came out, didn’t see his shadow, and thus predicted an early spring. Sand Mountain Sam, Albertville’s prediction Opossum, also predicted an early spring. We have one outlier though: Smith Lake Jake in Huntsville did see his shadow, predicting 6 more weeks of winter. Who can we believe? Statistics would recommend no one; Phil himself is only right about 40% of the time.

So, what can we say about the coming season? We still have over a month until spring, which official begins March 20th. In that time we can shape a general outlook based on global weather patterns, long-range modeling, and what we already know about current conditions. The most important thing to remember though, is that an outlook is not a forecast. If spring were to come early, that doesn’t mean we couldn’t still see a cold snap sneak into the forecast. It would just mean the overall trend would be a touch warmer. 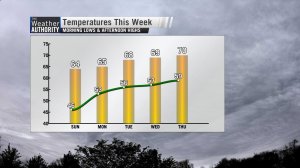 In the near term, it is looking more spring-like! The next week is certainly looking warmer than average, with highs in the 60s. We do see a chance at some cooler air moving in by next weekend, but it doesn’t look like a long-lasting hit of cold air. It’s looking very possible that we’ll stay above average through the first two weeks of February! For perspective: average low temperatures are in the mid30s, while average high temperatures are in the low 50s.

Beyond the first two weeks of February, the overall trend starts to cool down. That could be modeling, which often tries to trend toward the 30-year average. It could also be a continuation of our current trend, which despite last week’s wild weather (30s on Wednesday, then 60s by Friday!), has been close to average. Our temperatures were right on the target of average in January, with an average high of 51°F and an average low of 34°F.

It would be safe to assume the rest of winter will be fairly typical too. In a typical winter, we get a few milder spells and we get a few cold snaps. As always around here, you should stay prepared for both!

For more detailed/local forecasts, make sure you check our forecast discussion regularly!