Finished with frost? Temperatures plunged to the 20s and lower 30s early Monday; we’ll drop to the 30s and low-40s early Tuesday, and that’s ‘all she wrote’ for at least a week – and maybe for the season. 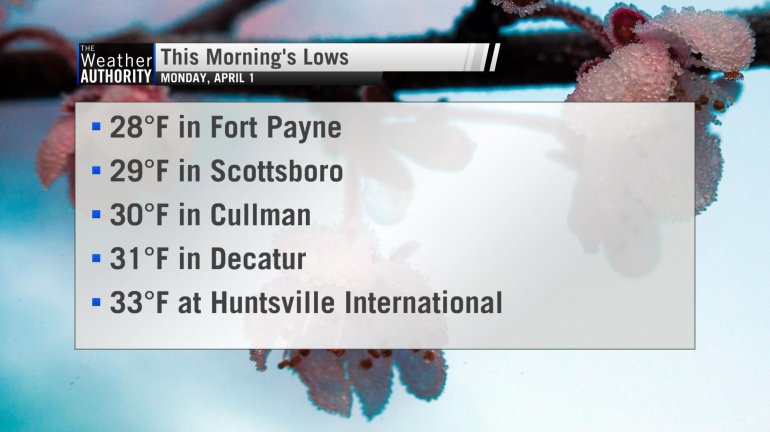 Huntsville’s final freeze of the year – on average – occurs in the first week of April. We could have one more ‘flirt’ with some frost or a freeze between April 10 and 15, but it’s unlikely that the majority of North Alabama or Southern Tennessee has another night cold enough to damage Spring gardens after April 15th.

So don’t plant yet, but the time is getting near!

Two rounds of rain/storms soon: Total rainfall within the next week looks a little below average for early April, but it will be more significant than what we got in the last half of March!

Two waves of rain and some thunderstorms move through Alabama and Tennessee: one on Thursday (including early Friday morning) and another Saturday into Sunday.

Neither of those looks especially ‘robust’ in the rain department, but the two events together add up to around 1/2” to 1” of rain by next Monday.

Weekend outlook: ‘Murky’ is never the way you want to describe the weekend forecast this time of year, but there are some details that can’t quite be discerned just yet!

The first detail: Saturday’s rain chance. We are adding a chance of some showers and a few storms to Saturday’s picture as warm, humid air surges north from the Gulf of Mexico. Often, that movement alone can be enough to create some ‘scattered’ downpours. It will be warm on Saturday between the showers: highs in the 70s.

Sunday’s chance of rain and storms is a little more concrete, but the risk of severe storms is not solid at this time.

So, given what we know: (1) plan for some rain at times for this upcoming weekend and (2) be alert for changes to the forecast as we refine both Saturday’s ‘chance’ of rain and Sunday’s potential for severe storms.